This is that moment where we say to Republicans, "Just get away from our government, please back away, don't touch anything." But we can't.

The worker shortage is the beginnings of a problem Republicans are making so much worse every day. It's like everything they touch dies. Let's start counting the ways.

1. Worker Shortage Blind Spot: It's hard to know where to start...let's start with the shortage in Wisconsin, and Scott Walker's desperate realization that we need labor just after bashing them with union busting, right to work, and banning local raises in the minimum wage. Business-friendly, but worker friendly? Nope:

AP: Wisconsin Republican Gov. Scott Walker ... launched a nearly $7 million national marketing campaign to persuade millennials and military veterans to move to his state to help with a worker shortage ... targeting millennials who live in the Twin Cities and Detroit media markets.

How bad is it in Wisconsin? Let's just say it continues the tradition of Democrats having come in and clean up the GOP mess again:


The hiring outlook (in Wisconsin) doesn’t take into account any companies moving into the state that plan to hire, including Foxconn (that) could employ up to 13,000 people in Wisconsin in the coming years. And 46 percent of employers across the country report having trouble finding workers. Retiring baby boomers and low unemployment are two factors making it difficult for companies to recruit.

2.  Throw in a Population Shortage: The timing couldn't have been worse:


The U.S. Census Bureau released its population change estimates for the year ending in July 2018 ... the national rate of population growth is at its lowest since 1937 ... declines in the number of births, gains in the number of deaths, and that the nation’s under age 18 population has declined since the 2010 census ... geographic mobility within the U.S. is at a historic low ... nearly a fifth of all states displayed absolute population losses over the past two years ... The delayed impact of the Great Recession ... the aging American population is the broader cause, a factor that the nation will have to cope with for years and decades to come. 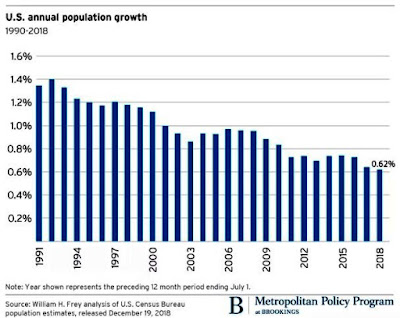 3. Build the Wall/Stop Immigration-The final Straw: Just by coincidence Trump Republicans want to shut down the border. Seriously, you couldn't devise a worse economic plan. And voters want Republicans in charge of the economy when they just naturally go off in the wrong direction?

4. Mobility Ends, Boomers pass bill off to next Generation: Putting everything off, like infrastructure, energy and health care, the next generation is going to struggle to pay for anything. Especially with tax hikes? Republican attempts to bring back the 1950's? Just the opposite:

Geographical mobility hits a postwar low: If there is one demographic indicator that might be expected to pick up in a rebounding economy, it should be geographic mobility within the U.S. Yet the latest data for 2017-2018 released by the Census Bureau shows that the percentage of Americans changing residence is at a post-World War II low of 10.1 percent—continuing a slowdown observed last year (See Figure 3). This is less than half the rate the nation experienced in the highly mobile 1950s and substantially lower than in the 1990s.

Trump won't care, and the next Decade will Pay for the "built the Wall" mentality: The takeaway is this;


Policymakers must place increased attention on caring for a larger and more dependent aging population, and dealing with the realities of a slower-growing labor force. In particular, it requires a more serious discussion of U.S. immigration policy because of the future contributions that immigrants will make to growing America’s society and economy.