Trump has successfully preserved his base largely on his use of twitter. So much so, that he knows they aren't going anywhere as long as he keeps it up.

Trump Wanna-be Scott Walker Dabbling...: If it worked for Trump, Walker's nope dope, twitter might be his ticket to the presidency. Well, not if he keeps this up. In just one week, Walker's tweets hit the sh** fan.

Let's start with Walker Tweet Wreck #1- AOC: Alexandria Ocasio-Cortez of all people couldn't help but reply to Walker's completely wrong tax lesson to a 5th grade class that he thought was profound: 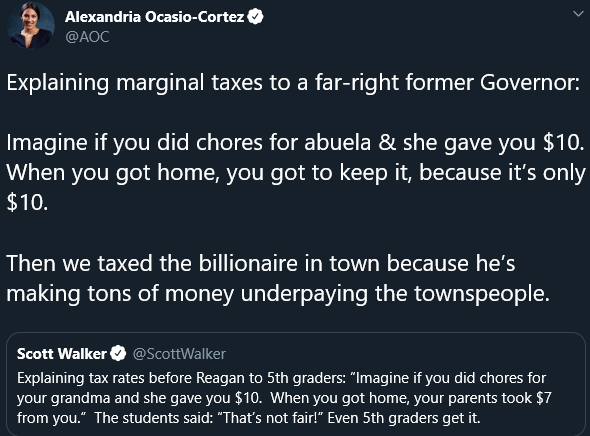 Walker Tweet Wreck #2-Lie: Walker is moving from deceptive misleading statements to flat out lying, because it worked for Trump: 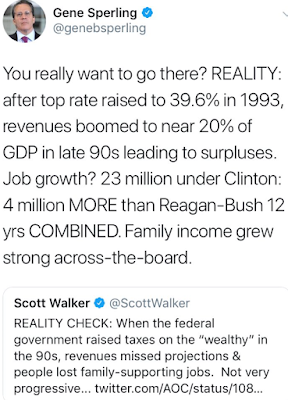 Walker Tweet Wreck #3-Make things Up: The Walker Authority laughingly kept saying they were returning control back to the taxpayers, when in fact Walker Republicans picked the pocket of taxpayers and threw their hard earned money out like paper towels after a hurricane to corporate special interested statewide. In turn, they had to repeal local control statewide to keep elected officials from blocking favored businesses from plundering their communities. This blog post is just a sample: 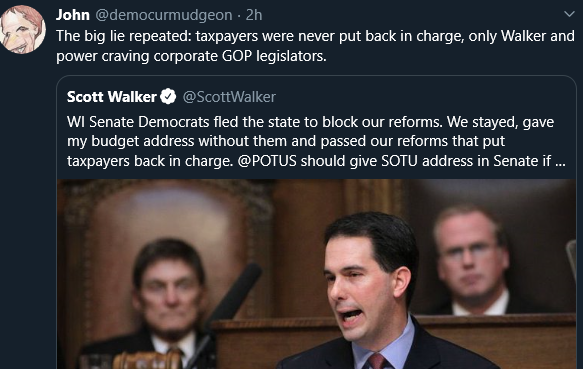 Tell me if Walker "put taxpayers back in charge" after reading Reporter Matthew DeFour nice summary showing us how Walker stole it away from local governments. And after taxpayers elected Tony Evers as Governor, did Walker take away or help the new governor fulfill the promises he made to the taxpayers?

Since consolidating control of state government in 2011, Gov. Scott Walker and the Republican Legislature have enacted a series of laws that upend a bedrock of their party’s conservatism: the principle of local control. The GOP has wrested from local government’s control of cellphone tower siting, shoreland zoning restrictions, landlord-tenant regulations, public employee residency requirements, family medical leave rules for private companies and large soft drink bans, among other things. It instituted a statewide voucher program opposed by many school boards and has kept tight property tax caps on school districts and municipalities. The latest and perhaps most disconcerting example for many local officials is a bill introduced by Sen. Tom Tiffany, R-Hazelhurst, that would limit a municipality’s ability to regulate certain aspects of frac sand mining operations, such as blasting, damage to highways, and air and water quality.

“Many (municipal leaders) will tell you how terrible it is and how it’s the worst they’ve ever seen,” said Dan Thompson, executive director of the League of Wisconsin Municipalities. UW-Madison political science professor emeritus Dennis Dresang said, “What we see from the tea party types and the radical right types is, ‘I've got an idea, I've got an agenda, and it really ought to apply across the board."

Walker Tweet Wreck #4-Imagine thinking Socialism Works? The US is a mix of both capitalism and socialism, not one or the other. Republicans love government when it works for business, but not so much for the people. Walker claims people know how to spend their money better...really? When have we ever spent our personal cash on road repair, school construction, building codes, environmental protection, energy tech, food inspections, living in outer space...? Thankfully, Jake's Wisconsin Funhouse responded: 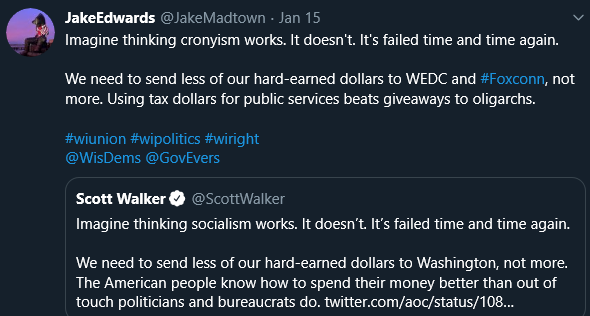