Poof!!! So much for the con "elections have consequences" argument pushed by Republicans.

Republicans are eliminating the Governor's office! Would I kid?

In what will probably be challenged to the Wisconsin State Supreme Court, like the GOP's losing attempt to limit the State Superintendent, Republicans want to not just limit the governor's powers, but the Attorney Generals as well. Will Republican voters go along with this blatant government overreach or gaming the system? Are you kidding? I can hear them shouting now, "In your face libtards!!!"

Like not having a Governor at all: What Republicans Scott Fitzgerald and Robin Vos are attempting to do right now is make the governor's office mostly ceremonial. No, they really are...Journal Sentinal:


1. The sweeping plan would remove Gov.-elect Tony Evers' power to approve major actions by Attorney General-elect Josh Kaul and give that authority to Republican lawmakers.

2. That could mean the campaign promise made by Evers and Kaul to immediately withdraw Wisconsin from a federal lawsuit to overturn the Affordable Care Act would likely be blocked. Evers' agencies would have less freedom to run their programs.

3. Compel Evers to implement a work requirement for some in the BadgerCare Plus health care program.

4. Make it tougher for Evers to alter a new program to keep premiums down for people who get insurance through Obamacare’s marketplace for individuals.

5. The governor also would no longer be able to choose who leads the Wisconsin Economic Development Corp., which oversees taxpayer-funded incentive packages provided to businesses in exchange for job creation. Lawmakers would have more control over the jobs agency, which Evers has promised to disband and replace with a state Commerce Department. The WEDC board would choose the agency's leader instead of the governor.

The 141-page plan goes further than what Senate Majority Leader Scott Fitzgerald and Assembly Speaker Robin Vos suggested lawmakers would take up during the so-called lame-duck legislative session before Evers takes office. "It’s real kind of inside baseball, kind of legislative stuff that it’s hard for me to believe people will get too excited about," Fitzgerald said three days before the plan was released.

Some of that "legislative stuff" wipes out "the will of voters"...


1. Restrict early voting to two weeks before an election. Currently, some communities provide as many as six weeks of early voting. The plan would be all but certain to draw a legal challenge given that a federal judge in 2016 struck down a similar law limiting early voting that he found "intentionally discriminates on the basis of race."

2. The measures would strip many powers from Kaul and eliminate a powerful office within the Department of Justice that was created in 2015 under Republican Attorney General Brad Schimel and handles high-profile cases on appeal. The Legislature — not the attorney general — would have control of how to spend money from court settlements. Legislators would gain the power to intervene in any litigation when a state law is challenged, and they would have the ability to appoint their own private attorneys — at taxpayer expense — to handle the case instead of the attorney general. Legislators would also have the ability to sign off on court settlements.

3. Separating the 2020 presidential primary election from an April spring election to reduce voter turnout in an effort to boost the election chances of a conservative Supreme Court justice.


And while putting infrastructure, education, and energy advances on hold for another decade or so due to lack of funding...

Evers and Kaul Push Back: Even the Mr. Rogers of Governors Tony Evers could not hold back his frustration:


Evers and Kaul said Republicans were ignoring the voters who elected them just three weeks ago. "I’ve said all along I’m committed to working across the aisle, but I will not tolerate attempts to violate our constitutional checks and balances and separation of powers by people who are desperate to cling to control. Enough is enough," Evers said in a statement. 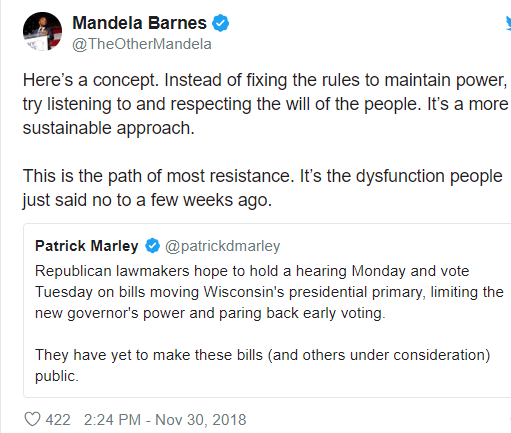