My Trumpian conservative friend in Milwaukee said he wasn't buying what Republican Rep. Robin Vos and Sen. Scott Fitzgerald were saying about their outrageous power grab against incoming governor Tony Evers and AG Josh Kaul. He's as outraged as Democrats.

The only saving grace is the fact that Republicans have definitely overstepped their legislative powers, which seems to be the only way out of this mess.

Biggest Issue in Governor and AG Race, GONE: Republicans will apparently win this by any means possible. Later they'll say Evers failed to fulfill a campaign promise. Onion too: 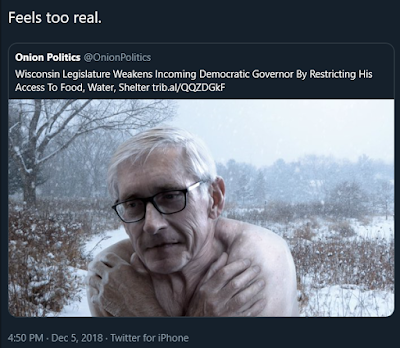 JS: The legislation would hamper Evers and Kaul from withdrawing the state from a federal lawsuit seeking to overturn the Affordable Care Act and the protections it provides for coverage of pre-existing conditions ... a central (issue) in both their races as Democrats hammered Republicans over the state's participation in the lawsuit that Walker authorized. Puts lawmakers in charge of litigation, allowing them to keep alive a lawsuit.

Kill ObamaCare and Coverage for Preexisting Conditions: And who was surprised by this...Republicans voted against their only ballyhooed solution to protecting preexisting conditions... high-risk pools? Yes, they did:


2. State senators failed to deliver on a campaign promise from Walker to approve legislation that protecting health insurance coverage for those with pre-existing conditions. All Democrats and two Republicans voted against that legislation ... The Republican caucus refused to support revisions to the bill from Craig and Kapenga that would have created a high risk-sharing insurance pool. Democratic senators voted against the bill because the legislation allowed insurers to impose lifetime caps on coverage.

Who cares about the Environment and Low Wages? Not Republicans: Killing transportation funding for smaller highway projects isn't just a job killer, but will probably kill smaller construction companies depending on federal funding. Thank the bald bizarro Sen. Duey Stroebel for this piece of genius legislation:

Legislation to concentrate federal money into a smaller number of road projects so that other projects could avoid having to comply with federal environmental and wage laws. Another provision slightly decreased income tax rates.

Much Needed Internet Sale Tax Revenue Thrown Out: Will we ever start spending state revenue on the backlog of desperately needed repairs and updating?

The following are HUGE changes as well and not secondary to everything listed above. This is the overreach that will hopefully win a court challenge by the new administration:

1. Bars judges from giving deference to state agencies’ interpretations of laws when they are challenged in court. That could make it easier to win lawsuits challenging how environmental regulations and other laws are being enforced.

3. Requires the Evers administration to report if the governor pardons anyone or his aides release anyone from prison early.

4. Forces Evers to get permission from the Legislature before asking the federal government to make any changes to programs that are run jointly by the state and federal governments. That would limit the governor's flexibility in how he runs public benefits programs. If the Legislature’s budget committee determined the administration was not implementing recent changes to those programs, it could reduce funding and staffing for state agencies.

5. Gives lawmakers — instead of the attorney general — control over how court settlements are spent.

6. Makes it easier for lawmakers to hire private attorneys at taxpayer expense when they are accused of violating the open records law or other statutes.