UPDATE: 12/1- Since this post covers a lot of ground proving Republicans aren't really "farmer-friendly," I had to include this additional big government regulation job killer:

Earlier this week, outgoing Attorney General Brad Schimel suggested in a legal analysis that barns rented for events are subject to the state’s liquor laws. His analysis came at the request of Rep. Rob Swearingen, a Republican from Rhinelander. On Wednesday, a state legislative committee tasked with examining the state's alcohol laws echoed Schimel, saying it interprets current laws to require venues like barns to obtain licenses to serve alcohol.

The thrust of Wednesday's committee discussion was that such new legislation actually isn't needed; the requirement exists in current law and should be enforced immediately.

It's also worth noting that Swearingen chairs the legislative committee. He is a former president of the Tavern League and the owner of a supper club — exactly the kind of business that would see wedding barns as competition, and unlicensed wedding barns serving alcohol as unfair competition.

Will rural voters continue to get behind Republicans, who might have eliminated a few environmental regulations, all the while they're being crushed and ignored by their party? Time will tell.

There's one big difference between the parties; Republicans never think to fix huge problems smacking them in the face, and Democrats do. It's that simple. Guns, pollution, health care costs, climate change...big problems that never move the needle for Republicans.

Dairy farmers are seeing this first hand, and if nothing is done, we'll have even more and bigger problems in the future...that Republicans won't want to fix.

And you can blame the cult-like tribal Republican Party loyalty under Trump for making this worse. What else could explain voting for a disconnected millionaire who's doing everything he can to make farmers lives miserable?

Not only are dairy farmer losing sales and established business relationships, but he's going after their workforce with ICE raids:

In September U.S. Immigration and Customs Enforcement conducted a four-day operation in Wisconsin. They visited 14 Wisconsin counties and arrested 83 people they referred to as "immigration violators" and "criminal illegal aliens."

John Rosenow is a dairy farmer in Buffalo County. He hires immigrant workers to do everything, from driving and fixing tractors to milking and delivering cows. He said without their help, he would go out of business. "I would no longer be able to milk cows. It would destroy my life," he said.

Trump is actually getting further away from actual immigration policy, now that he's threatening to close off the border completely, making all this devasting:


According to the American Immigration Council, nearly 5 percent of Wisconsin residents are immigrants, and 22 percent are working in the farming and fishing industry.

Don't worry, Trump's got the farmers back again. Heck he's passing out other peoples hard earned tax dollars to his rural voting base for votes, but forgot to tell them it wasn't going to be much;


Just $838 million has been paid out to farmers since the first $6 billion pot of money was made available in September.

And tariffs aren't hurting Trump one bit either! But if you're a dairy farmer, he's killing you and he's probably already forgotten how important you are to the economy:

The program’s limitations are beginning to test farmers’ patience. The trade war shows no signs of easing,

The milk federation expects dairy farmers to lose $1.5 billion from the tariffs in the second half of this year and it has received only $127 million in aid.

“This was supposed to make sure farmers were not the victims of this trade policy,” said Jim Mulhern, president of the National Milk Producers Federation. “I think most agriculture producers feel that the payments have not come close to making up for the damage for the tariffs.”

And without a national plan to save the dairy industry, like Canada, generations of farmers will be gone leaving corporate farms with a lock on an entire industry.


The most recent downturn in dairy farming – now in its fourth year — was one of the worst he'd seen. For many farmers, the price they've received for their milk hasn't covered their expenses. Some have lost thousands of dollars a month, and there’s not much relief in sight as the marketplace is flooded with the commodity they produce.
As of Nov. 1, the dairy state had lost 660 cow herds from a year earlier, and the number of herds was down nearly 49 percent from 15 years ago — nearly half the size it was just 14 years ago. Meanwhile, the number of dairy cows has increased 2.6%. That’s because the remaining dairy operations are, in many cases, much bigger. But even some of the bigger farms have not survived.

And Rural Life continues to Change for the Worse:

“The multiplier effect on the rural economy is huge. It’s why you are seeing all these boarded-up small towns,” Peck said.Wisconsin is on track to lose more dairy farms this year than in any year since at least 2003, according to state Agriculture Department figures for dairy producer licenses.

Like the sad pleas by families for Health Care support, Farmers are now reaching out with Go Fund Me: 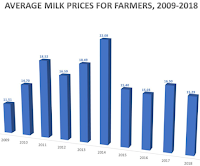 There are now more than 2,500 U.S. dairy farms on the website, with some farmers urgently appealing for help after their finances were ruined by three years of low milk prices.

“I have never asked for a handout, but I can’t keep borrowing money to pay for things,” one Wisconsin farmer wrote. “Thank you from the bottom of my heart for even considering helping us continue our journey.”


Dairy producers feel like collateral damage in a war they had nothing to do with. Wisconsin may bill itself as “America’s Dairyland,” but California is the leading dairy state in the union, with the most cows and highest production. California dairies had made great strides in opening new foreign markets, in part by exploiting the benefits of NAFTA and by focused approaches to China and other Asian markets. “These are markets we’ve been working on for years,” says Annie AcMoody, chief economist for the trade group Western United Dairymen. Dairy producers fear that while they’re shut out of the markets, competitors from Europe, Australia and New Zealand will take the opportunity to strengthen their foothold. “Once you lose a market, it takes time to get it back,” she says.

Here are a few other images I've featured in the past: