While many of us marvel at the outrageous behavior of Scott Walker and his band of Republican pirates plundering what's left of Wisconsin, we shouldn't lose sight of their real enablers...conservative voters.

Conservative voters automatically elect Republicans, even when the destructive things below happens over and over again. What are we talking about? These now empty and meaningless phrases; "will of the people" and "deficits matter."

Scott Walker/Vos/Fitzgerald Power Grab Embarrassing but Necessary: Republicans have a higher calling so they can do almost anything they want because they're saving the country from those radical, traitorous, liberal leftists, right?


Hey @chucktodd, honest question: What’s an example of Democrats using a lame duck session to strip power away from an incoming administration? In any state? https://t.co/Dws8x005gB
— Parker Molloy (@ParkerMolloy) December 9, 2018


Chuck Todd says of Wisconsin GOP's legislative coup: "Democrats have done this in the past to Republican governors in lame duck sessions in other states." This is objectively, provably false.

Nope. Democrats haven't done this in other states. In fact, it's just the opposite, as PolitiFact Wisconsin pointed out below. Scott Walker actually wanted to limit the power of outgoing Governor Doyle, even before he took office:

On Nov. 10, 2010, Walker delivered a letter to Doyle’s administration with five requests:


1. Delay implementation of the new Affordable Care Act in light of Walker’s plans to challenge it in court

2. Suspend negotiations with the state employee unions so they could be considered in the context of the upcoming budget

3. Don’t finalize any permanent civil service personnel because these appointees "should be required to go through the same application process as any other civil servants."

5. Delay implementing any new administrative rules — Walker added, "I feel strongly that if new or updated rules were urgently needed, they would have been completed prior to now."

Not a problem for Republican voters. It all makes perfect sense to limit the radical "left-wing" agenda that won over Wisconsinites and made Tony Evers our next governor. Go ahead Scott Walker, sign the GOP bills, who's gonna remember 2 years from now anyway?

Higher Deficits and Lower Taxes, Paul Ryan's Voodoo Economic Spell over Voters:  Wisconsin's own notoriously brutal Paul Ryan conned voters by selling himself as an economic genius, spouting numbers and theories that made voodoo supply side economics seem like magic. Well, Voxdotcom has big news for his loyal voters who just elected Ryan clone Bryan Steil, who astonishingly won his last-minute campaign not having to know anything about the issues. Steil redefined "generic," and added new meaning to "robotic." But I digress... 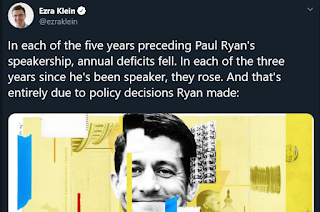 $343 billion. That’s the increase between the deficit for fiscal year 2015 and fiscal year 2018— that is, the difference between the fiscal year before Ryan became speaker of the House and the fiscal year in which he retired. If the economy had fallen into recession between 2015 and 2018, Ryan’s record would be understandable. But it didn’t. In fact, growth quickened and the labor market tightened — which means deficits should’ve fallen. Indeed, that’s exactly what happened in each of the five years preceding Ryan’s speakership; from 2011 to 2015, annual deficits fell each year.

As he prepares to leave office, Ryan says that debt reduction is one of those things “I wish we could have gotten done.” Ryan, the man with the single most power over the federal budget in recent years, sounds like a bystander, as if he watched laws happen rather than made them happen. To understand the irony and duplicity of that statement, you need to understand Ryan’s career.

“It’s time politicians in Washington stopped patronizing the American people as if they were children,” he wrote. “It’s time we stop deferring tough decisions and promising fiscal fantasies.”

Those tough decisions would negatively impact the economic and physical health of every American, but not the corporate or the rich.

Best for Last; The Elusive Democratic Argument for everything, especially Universal Health Care:  Incoming Congresswoman Alexandria Ocasio-Cortez got right to the heart of our upside down political system. What's striking is her lack of hesitation and her ability to ask the basic question voters have been craving for years;


Cortez: "...we write unlimited blank checks for war, we just wrote a $2 trillion check for that tax cut, the GOP tax cut, and nobody asked those folks how are they going to pay for it.

So my question is why is it our pockets are only empty when it comes to education and health care for our kids. Why are our pockets empty when we talk about 100 percent renewable energy that's going to save this planet and allow our children to thrive. We only have empty pockets when it comes to the morally right things to do. But when it comes to tax cuts for billionaires and when it comes to unlimited war, we seem to be able to invent that money very easily. And to me, it belies a lack of moral priorities that people have right now, especially the Republican Party."