Simply, Scott Walker wants to get into every classroom and teach every child in the country "objective" American history. Huh oh...

Below I have examples of what Objective American History would look like in Scott Walker's world.

#1. Objective History? Imagine, an overtly subjective political ideologue like Scott Walker, wanting "objective history" taught in every classroom in the country. Something suspicious there. Well, that raised so many red flags for me, that to be objective, I had to investigate this tired old unoriginal construct of the radical right.

Here's what I found with a simple google search about "historical objectivity:"

1. To reconcile ourselves to the presence of subjectivity, which enters at every step in the process of investigation; 2. the present can and does influence our knowledge of the past. 3. The conversation which is history does lead to further conversation … because at no point we can say that we have arrived at the absolute truth. 4. Stephen Berer, Education Coordinator: "History is an entirely human-constructed phenomenon, produced after-the-fact … constructed and subjective.

#2. Walker sells "Objective History" by Shredding First Amendment?: The Bulwark pointed out how Walker chose to show images of Americans protesting their government in his latest insane video sales pitch. Notice Walker's closed caption comment at the bottom of the screen! So, he fought against great public schools, Wisconsin education, and families? Seriously:

"As governor of Wisconsin, I learned how to fight back." 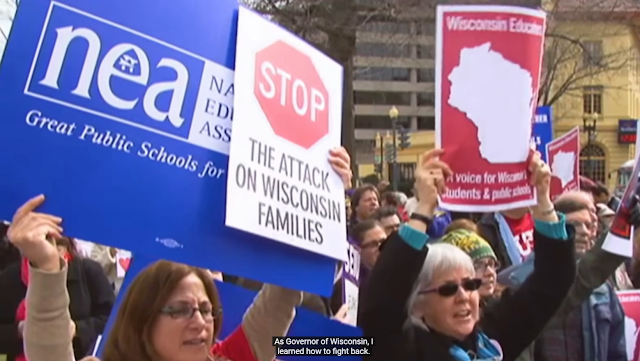 There are additional images in the first 15 seconds of his video:
In the full Walker video "objective history" means every crazy QAnon pundit out today will be teaching our kids. And he's still the sharpest tool in the shed:

Scott Walker: "I stood up against a hundred thousand protesters in defense of freedom."

Yeah, he really said that:

Consider: Walker’s video ominously warns unironically that “America is under siege,” with scenes of campus unrest, but does not mention the siege of the Capitol on January 6. It is as if it never happened. But in Walker’s history, a lot gets dropped down the memory hole.

He added that because of progressive professors and liberal politicians, “this generation just doesn’t believe what the facts show to be true.”

#3. Happy "American Exceptionalism's" Objective History: Walker is heading up a movement that hasn't been subtle about their revisionist intent; a positive uplifting summary of history:
Objective History? Example A: This is happening right now in Wisconsin. This is an actual candidate for Waukesha's school board. Imagine what his idea of an "objective education" is: 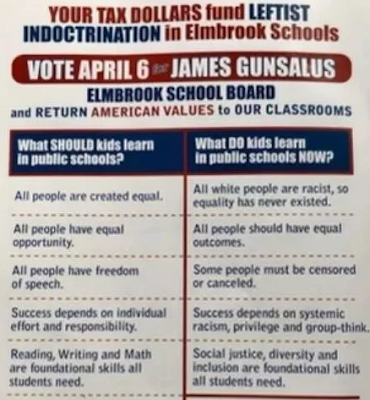 Objective History? Example B: Colorado's Jefferson County school board is finding out that the next generation won't be happy with propaganda dressed up as history. This could take your breath away:

CBS/AP: Students are upset by a proposal, drafted by board member Julie Williams, that would form a committee to inspect curriculum in those advanced history classes. It would insure teachers covered concepts like patriotism, the free-enterprise economy and respect for authority — and eschewed subjects about civil disorder and social strife. Ken Witt, the president of the school board, said he thinks students are being used as pawns by teachers, who are unhappy with the history proposal as well as a new pay plan.

An Oklahoma legislative committee overwhelmingly voted to ban Advanced Placement U.S. History class, persuaded by the argument that it only teaches students “what is bad about America.” Other lawmakers (want to) prohibit the teaching of all AP courses in public schools. Oklahoma Rep. Dan Fisher (R) said the AP history class fails to teach “American exceptionalism.” The RNC said a new framework for the exam “reflects a radically revisionist view of American history that emphasizes negative aspects of our nation’s history while omitting or minimizing positive aspects.”

Rep. Dave Brat (R-VA) said, “Socrates trained Plato in on a rock and then Plato trained in Aristotle roughly speaking on a rock. So, huge funding is not necessary to achieve the greatest minds and the greatest intellects in history.” He thinks the answer “would be to get private sector folks into every one of our schools, get the CEOs in the schools and move beyond this just narrow policy debate and really have a revolution.”

2015: Redefining education as “welfare” Mississippi state representative Gene Alday made national headlines recently …  Alday went on his rant in part because he was trying to justify his opposition to increased funding for elementary school education...teaching kids reading and writing amounts to “welfare” and to suggest that education is wasted on black people in particular.

Two leading state Republican lawmakers are threatening the University of Wisconsin System that if it doesn't remove a course called "The Problem of Whiteness" from UW-Madison's spring semester offerings, the UW's requests for more state funding and a bump in tuition may be denied during budget deliberations next year. “Our friends at UW-Madison not happy enough with labeling 'whiteness' as a societal problem, now are attacking another societal ill…, Men and their masculinity. UW-Madison has become part of a national liberal effort to rid male students of their 'toxic masculinity … believe that Wisconsin mothers and fathers have done a poor job of raising their boys by trying to instill in them the values and characteristics necessary in becoming a Man.”

Objective History? Example G: Step out of line and this happens:

Government censorship of political speech? That's what Vos was suggesting with his little shot over the bow, and a little taste of the kind of freedom and liberty you can expect from the Walker Authority. Seeing a sitting president speak at a public university, even during a campaign, would be something state official's would normally be proud of.It's enough for this inadequate smarmy politician to call a penalty on the university. Oh, and he says he's not being political? WKOW TV::