Party of Political Punishers...continues to continue, Rejecting $1.6 billion of our Tax Money!!!

Vos-Republicans want you to believe that Medicaid is a welfare program. But Medicaid is a major domestic program paid with our tax dollars. It helps Americans who can't afford coverage, and has a positive effect for state economies.

So Republicans want to punish the poor with... 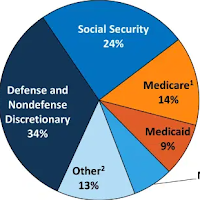 Punishment # 10: Reject $1.6 Billion for Medicaid, and say it's "Welfare?": The Fiscal Conservative Myth-Exhibit A: It's our money, right? The party of punishment would rather walk away from $1.6 billion of our own federal taxes to expand Medicaid (BadgerCare). But it saves lives. No, it's "welfare!" Welfare to the undeserving. Roll the video...

You don't deserve the "privilege" of health care says Dumb Ron Johnson to a group of school kids. You can't make this stuff up...:

Vos-Republicans reject President Biden's $1 billion American Rescue Plan Act Relief Funding for Wisconsin: The thing is, this is such a massively irresponsible act of pure political idiocy, you gotta ask, where the hell are conservative voters? 90,000 more Wisconsinites could have health care!!!

The bonus provision: Wisconsin would receive an additional $1.025 billion over two years if it agrees to accept the expansion. Gov. Tony Evers’ proposed 2021-23 budget bill includes accepting the ACA Medicaid expansion subsidy, which by itself would save the state $635 million, according to the fiscal memo. The new $1 billion bonus is in addition to that amount.

Sen. Jon Erpenbach (D), added that rejecting the expansion would be “a costly missed opportunity and a slap in the face to every Wisconsin resident. It was already foolish for Republicans to reject the BadgerCare expansion in the last budget, but we cannot afford to lose out on a billion dollars in additional funding.”

How does providing health care "trap" people into poverty? It can't. Here's the direct quote: 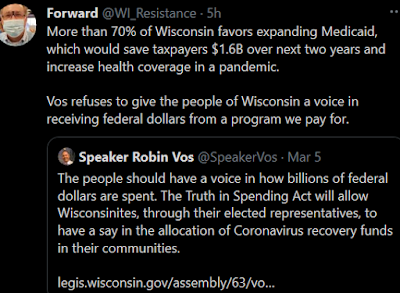 Republican Idea? Dumb, Irresponsible, Simple, and Ridiculous: You can't just randomly tell insurers to include preexisting conditions. Insurance premiums will skyrocket, and there's nothing in the bill below preventing that from happening. Even worse, the bill only kicks in if the ACA is repealed:

Assembly Majority Leader Jim Steineke (R-Kaukauna) issued a statement promoting a group of health care bills that the Assembly Rules Committee put on the Assembly schedule.
Assembly Bill 34 relates to maintaining coverage of individuals with preexisting conditions should the Affordable Care Act be struck down by the courts.