Guess who sounds just like your crazy, ranting, Trump cultist neighbor next door? He's a Justice out to protect our feelings!!!

Samuel Alito!!! It is now clear Democrats need to expand the Supreme Court for the sake of saving our nation from the Supreme Courts whining babies. So this is what conservatives call "textualism?"

Protecting the Feelings of People's Racist Bigoted Speech, that's Alito's real Constitutional Test: The most frightening revelation was Alito's thought process, conclusions that have nothing to do with the Constitution, but more to do with protecting conservative speech. 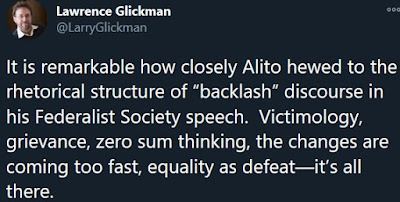 No one restricting the speech of bigots and racists. It's just the inevitable consequences of owning your position that Alito objects to. If anything, Alito really wants to silence the speech of those calling out bigotry and racism.

Same-sex marriage? (These days,) “you can’t say that marriage is a union between one man and one woman” without fear of reprisal from schools, government and employers, Alito said.

“Until very recently, that’s what the vast majority of Americans thought. Now it’s considered bigotry,” he said, adding: “One of the great challenges for the Supreme Court going forward will be to protect freedom of speech.”

Uh, we should protect speech from...people judging you, and holding a person responsible for their opinion? And that's where in the Constitution, snowflake?

1. He suggested there was no actual harm in a Colorado bakery refusing to make a cake for a same-sex wedding, noting the couple “was given a free cake by another bakery, and celebrity chefs have jumped to the couple’s defense."

2. He suggested lawmakers had given too much deference to “experts.” He suggestively alluded to the idea that it was done so that “policy-making would become more ‘scientific’ " — a section that could certainly be read today to reflect conservative resistance to the advice of medical experts like Anthony S. Fauci: "And what have we seen in the pandemic? Sweeping restrictions imposed for the most part under statutes that confer enormous executive discretion."

Slate: On Thursday night, Justice Sam Alito delivered the keynote address at this year’s all-virtual Federalist Society National Lawyers Convention … These comments revealed early on that Alito would not be abiding by the usual ethics rules, which require judges to remain impartial and avoid any appearance of bias. The rest of his speech served as a burn book for many cases he has participated in, particularly those in which he dissented. Remarkably, Alito did not just grouse about the outcome of certain cases, but the political context of those decisions, and the broader cultural and political forces behind them.

The government’s response to COVID-19, Alito continued, has “highlighted disturbing trends that were already present before the virus struck.” He complained about lawmaking by an “elite group of appointed experts,” citing not just COVID rules but the entire regulatory framework of the federal government.

Alito also disparaged Washington state for requiring pharmacies to provide emergency contraception—which, he claimed, “destroys an embryo after fertilization.” (That is false.) Finally, Alito rebuked Colorado for attempting to compel Jack Phillips to bake a cake for a same-sex couple.* He noted that the couple was given a free cake and supported by “celebrity chefs.”