Trump called himself "the wartime president." We're almost there...

What about a person's "freedom and liberty" when they're ordered back to work during a pandemic under threat of being fired and loss of unemployment benefits? Anyone?

Bob Prailes announced last week that he was running as a Democrat to take on Assembly Speaker Robin Vos, one of the state's most powerful Republicans. Prailes, a lifelong resident of Burlington and a carpenter who has been active in his community for years unexpectedly pulled the plug on his campaign. He said he and his family were being verbally attacked.


"I had people that were approaching us when we were together as a family, swearing at us, commenting to my wife. I don't want to say too much. I just think that people made very personal and ugly attacks towards me and my family either through walking up to me or yelling at me or through social media. It got to the point where my family and I decided we didn't want to be part of something like that. I just blame it on today's politics."

2. Now Washington State Residents are being threatened for Liberty and Capitalism! All this coming from a group of 1,500 protesters. Yup, a real movement call the "Three percenters," which is also an exaggeration. Note: OSHA is not enforcing workplace violations during the pandemic:

Two Facebook pages during the past week posted names, emails and phone numbers of state residents who had complained to the state about businesses allegedly violating Gov. Jay Inslee’s stay-at-home order … the Facebook posts have generated threats of violence and harassment against them.

One group publicizing the names, the Washington Three Percenters...the far-right group of self-described “God fearing Patriots,” had this message: “Want to snitch on your neighbor? Don’t expect to hide behind you (sic) computer screen.” With the message, the group provided a link to a spreadsheet containing the names and contact information of people who made reports to the state.

Matt Marshall, a leader with the Washington Three Percenters, defended the Facebook post: “We have enough business owners that are going under, and they want their constitutional right to face their accuser.”

Some members reacted with glee to the unmasking. “Snitches belong in ditches,” one man wrote.

“People getting death threats a bit harsh, but I’ll bet they don’t do it again!” another added.

Reopen Washington describes itself as state residents … response to the mass hysteria of COVID-19.”

Gathering in defiance of the stay-at-home order and against the guidance of state and federal public health officials, Saturday’s rally drew roughly 1,500 people...that was fewer than the more than 2,000 who attended a similar protest last month.

3. I hate to leave everyone on this down note, but I was fascinated by the following observation from The Intercept.


As we bear witness to armed white American militias storming or protesting outside government institutions, it is clear that the chaos and tragedy of Covid-19 are being used by Trump and the GOP to enhance the conflict and accelerate the birth of a new, greater America. At the heart of every nationalist mythology is some kind of a rebirth, usually bloody and requiring sacrifices, preferably of the weak and the doubtful.

They now have no choice but to follow their trajectory to its logical extreme … They will kill if they have to, or at least let Covid-19 do it.

The ongoing conflict is not a glitch but a process that cannot be stopped or resolved politically. With the GOP in death-cult mode, a steady destruction of checks and balances previously imagined to be fail-safe, the jelly-spined leadership of the Democratic Party, and the Soviet-grade purging of any disloyalty or disobedience in the federal systems, Trump has effectively destroyed American politics.

What is even more frightening is the hankering across the political range for a magical national correction, the indulging of a persistent fantasy that some essential American quality (decency, reasonability, checks and balances, etc.) will finally kick in and halt the Trumpist madness, thus allowing the country to snap out of its nightmare and revert to its good old national essence. 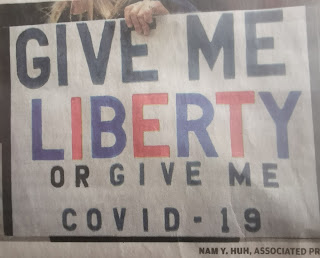 Labels: Back to work, COVID-19, Trump Wartime President
Email ThisBlogThis!Share to TwitterShare to FacebookShare to Pinterest