UPDATE-5/15/2020: Since the Supreme Court never clarified why it did what it did and what the option are...chaos:

By Friday, health officials in Kenosha, Brown, Manitowoc and Outagamie counties had dropped orders, as did the cities of Cudahy and Appleton. The Wisconsin Counties Association said after Wednesday’s ruling that it was unclear whether whether local orders mimicking the statewide mandate would stand up in court.
Wisconsin’s largest and most liberal counties, Milwaukee and Dane, home to about 1.5 million of the state’s 6 million residents, left their orders in place. State law allows local health officers to “do what is reasonable and necessary for the prevention and suppression of disease.” They can issue edicts without going through the rule-making process that the high court said state officials must use.

The Republicans have foisted off an odd twist to self governance. The idea that their voters, especially their voters, would act responsibly and live by the rules handed down by their capitalist leaders, business lobbyists.

Back at it again, Republican Rep. Robin Vos suggested that freedom, liberty, and self governance is all we really need to fight a pandemic. Trust the public to voluntarily do the right thing, all the rules are out there to follow...:


“Republicans believe business owners can safely reopen using the guidelines … We urge our fellow small business owners to utilize the suggestions as a safe and effective way to open up our state. “Wisconsin now … can continue to follow good practices of social distancing, hand washing, hand sanitizer usage and telecommuting. This order does not promote people to act in a way that they believe endangers their health.

Here's a look at self-governance based on trusting the small crowds of protesters, with their guns, Nazi symbols and calls for the governors recall, to control state public policy. A bunch of real constitutional scholars, following good practices blah, blah, blah. Really, did anyone believe that bullsh*t? Face masks anyone?

On Wednesday night in the heart of downtown Platteville, Wis., just hours after the Wisconsin Supreme Court threw out the state’s stay-at-home order, Nick’s on 2nd was packed wall to wall, standing room only.

It was sometime after 10 p.m. when “Long Cool Woman in a Black Dress” by the Hollies came over the sound system and a bartender took out his camera. In a Twitter broadcast, he surveyed the room of maskless patrons crammed together, partying like it was 2019. A few were pounding on the bar to the beat. Some were clapping their hands in the air and some were fist-pumping, a scene so joyous they could have been celebrating the end of the worst pandemic in a century.


Assembly Majority Leader Jim Steineke’s chief of staff Rusty Schultz … encouraged those who do participate during the pandemic do so safely and adhere to social distancing guidelines. 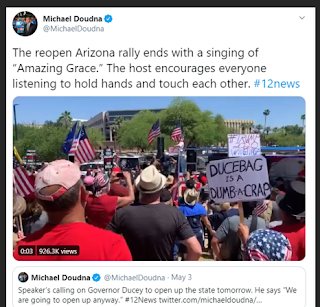 Sen. Duey Stroebel doesn't buy that argument. "If you think the citizens of this state are a bunch of fools incapable of handling their lives in an appropriate manner, then I guess we might be into chaos," Stroebel said of the governor's take.

COVID-19 Safe-at-Home Repeal brings Illinois bar hoppers to Wisconsin: Maybe Scott Walker couldn't entice people to come to the state, but this has: 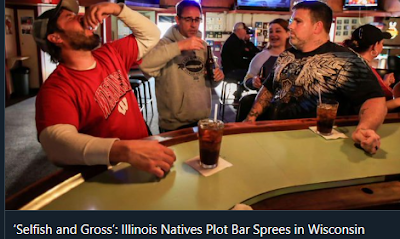 The Daily Beast spoke with several Illinois residents who shared plans to travel this weekend to Wisconsin. While they generally said they were aware of coronavirus-related travel concerns, they echoed a simmering national debate about how long economies can be placed in hibernation. Anthony Hersick, 22, from Ingleside, Illinois, said he and some friends were planning on crossing the border to Lake Geneva, Wisconsin, to head to the bars and clubs in the area. “I’m a little worried [about COVID-19], but we are here to support our friends,” he told The Daily Beast.

“Quite frankly, those who find themselves wandering [across state lines] should be forced to stay there,” said Patty Steel of Wonder Lake, Illinois. “Your desire to sit in a restaurant is selfish and gross, especially after Wisconsin posted almost 300 daily cases of COVID-19 yesterday.”

Even the Daily Show couldn't avoid the absurdity of the moment:

Republicans are now targeting local stay at home orders, kind of a distraction from not having a plan. Keep the agitated Trump Covidians angry:


Many cities and counties in Wisconsin have their own emergency or Safer at Home orders. Fitzgerald says he doesn't have a problem with letting those continue for another week, or until local voters demand their communities be reopened. 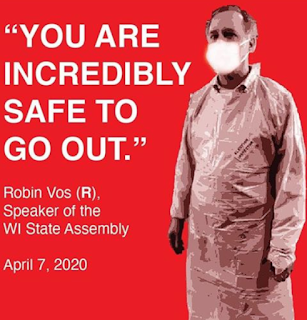 Fitzgerald already has his eye on his last assault, putting our kids on the front lines of the pandemic, back in school, no matter what things look like in September:


Fitzgerald said "The focus moving forward should be about the bigger, broader questions, like are K-12 schools coming back in the fall? Is the UW System going to have kids loading up their cars and driving down and move into a dorm room?"