Conservative Activist State Supreme Court will side with Business over Lives, fighting Tyranny of a Health Emergency?

It's gonna happen. It's back to work during a pandemic, and can't you just wait for Republicans to kick people off unemployment for refusing to going back to work fearing for the health. Want to bet these brave Republicans won't be socially mingling with the voting rabble anytime soon?

Was there any doubt that business would win this one?

This all seemed so responsible once:


Vox: Here is the text of a state public health provision allowing Palm to issue both rules and orders to prevent the spread of disease: the department may promulgate and enforce rules or issue orders for guarding against the introduction of any communicable disease into the state, for the control and suppression of communicable diseases, for the quarantine and disinfection of persons, localities and things infected or suspected of being infected by a communicable disease and for the sanitary care of jails, state prisons, mental health institutions, schools, and public buildings and connected premises. Any rule or order may be made applicable to the whole or any specified part of the state, or to any vessel or other conveyance.

Outrageous huh? The corrupt and openly activist State Supreme Court's Chief Justice just gave us this opinion based on belief not law:


JS: Supreme Court Chief Justice Patience Roggensack dismissed the idea that the outbreak was community-wide and could be replicated elsewhere. "(The surge) was due to the meatpacking — that's where Brown County got the flare," Roggensack said. "It wasn't just the regular folks in Brown County."

The working class aren't "regular folks," according to Wisconsin's Republican chief justice, who is content to let them die. pic.twitter.com/JvnwdXJsPF
— Timothy Burke (@bubbaprog) May 5, 2020

Not to be outdone declaring her patriotism, the most bigoted Justice, Rebecca Bradley, not only repeated the armed militia protesters claim of a tyrant governor, but...:

"Isn't it the very definition of tyranny for one person to order people to be imprisoned for going to work among other ordinarily lawful activities?" asked Justice Rebecca Bradley, who later questioned whether the administration could use the same power to order people into centers akin to the U.S. government's treatment of Japanese Americans during World War II.

Check it out here, Bradley's comment on tyranny, along with DOJ attorney Colin Roth's dire warning people WILL DIE:

Here's a little back history of Justice Bradley, and yes, she really wrote this stuff and got elected anyway by discriminating conservative voters: 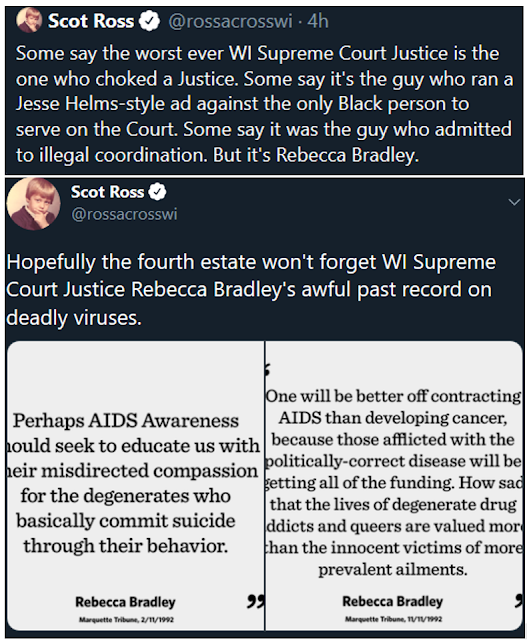 If...or should I say when the court sides with Fitzgerald and Vos:


A legislative committee with three of the most critical lawmakers of the Evers administration's response to the virus outbreak will have veto power over the new rules.

The arguments were held virtually, and the irony was mind blowing. We'll see how quickly Republican legislators start shaking hands, appearing in summer parades, and meeting publicly with their walking viral voters.

The State Supreme Court's almost slam dunk decision to take emergency powers away from the governor - any governor - will move Wisconsin's public health policies to those less stringent than the measures taken during the 1918 Flu pandemic.

With the Republican gerrymandered safe majority overturning the governors ability to manage threats to public health, it's no wonder Gov. Tony Evers (ee-vers) tweeted this:

In his filing, AG Josh Kaul said Gov. Evers and the state Department of Health Services have broad authority to implement public health measures to respond to a pandemic … subjecting pandemic management to the Legislature would be too slow to provide a nimble response. “The Legislature’s attempt to undermine critical public health measures ignores the law and endangers our safety,” Kaul said in a statement.

Representing business interests and their pay-to-play campaign funding of Republicans, pouting Rep. Robin Vos and Sen. Scott Fitzgerald are going to sacrifice a few lives at the capitalist alter. After all, the state would be "irreparably harmed?" Don't think so, but the dead victims would better fit that description:


Attorneys for the Legislature said the state will be irreparably harmed if the order persists, and that it is arbitrary and capricious and exceeds the administration’s authority.

CapTimes: A century ago, Wisconsin progressives made public health initiatives central to their “Wisconsin Idea” approach to governing, while the Socialists who led Milwaukee declared, “The public health is the most vital concern of the people.” Socialist Mayors Emil Seidel, Dan Hoan and Frank Zeidler were so determined to stop the spread of infectious diseases with better sanitation that they came to be known as “sewer socialists.”

On Oct. 10, 1918, as the influenza pandemic spread, the state Health Officer, Dr. Cornelius A. Harper, took the extraordinary step of ordering all public institutions in Wisconsin closed. “In no other state was such a comprehensive order issued,” explained the Wisconsin Historical Society, “and it stayed in effect until the epidemic burned itself out in late December.”

Hoan never stopped pushing public health as a social justice issue. By the 1930s, Milwaukee was so advanced in its approach that it topped national studies of the healthiest cities, as the mayor explained, "the savings in medical and hospital expense, added to the actual savings in lives, not to speak of suffering and of weakened bodies, far outweigh the almost nominal cost in tax dollars of a progressive and expanding municipal health progress.” - John Nichols is associate editor of The Capital