The Trump "DEATHCULT" is warping into some kind of alternative evil-like universe, swallowing up whole, what remains of our current reality!

This is surreal. Trump Covidians are even glad to see gas pump prices going back up and posting price lists whining about how low the post office prices are to ship packages compared to the other delivery services. Want to send a letter for $4? They want higher prices because the Orange God hates the Postal Service.

BACK-TO-WORK Freedom to Shop Militias: In almost every state, "back-to-work" COVID-19 deniers are suing governors in their state supreme courts so they can deny them the extraordinary power to fight against a health crisis like pandemics, now and for all future health threats. Most revealing, this is not happening in GOP governor run states with similar orders. 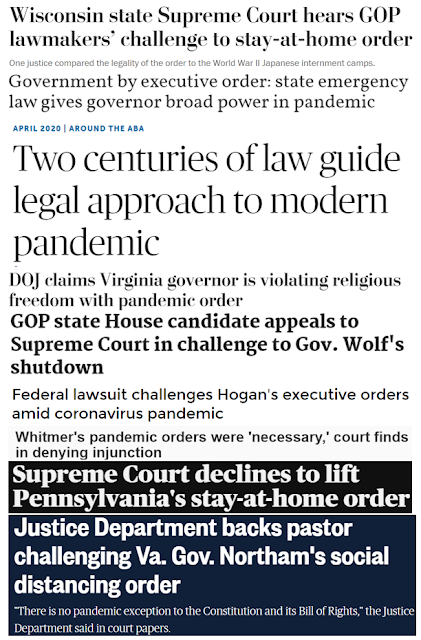 Michelle Gregoire, a 29-year-old school bus driver from Battle Creek who is running as a Republican for a seat in the state House, waved a yellow “Don’t tread on me” flag at passing traffic. She derided Gov. Whitmer as “a tyrant.” But she also urged Republicans “to get in line and get it together.” The protest and others like it — including two last month that included demonstrators with swastikas, Confederate flags and some with long guns inside the capitol — have alarmed lawmakers on both sides of the aisle.

Let's Spread Meningitis, Anti-Vax Republicans want to expose the public to really Deadly Preventable Deaths:
Since the only way to stop COVID-19 from spreading is with a vaccine, anti-vaxxers see another way to make things so much worse. Just add it to all the other "make life miserable" reasons science-denying conservatives want to spread to "MAGAt's" dark ages platform.

WSJ: As the public awaits a vaccine that could end the COVID-19 health and economic crisis, Wisconsin Republicans say they aren’t convinced the state should require certain vaccines for school children recommended by the medical community.

Republicans objected to part of a rule that would have required seventh-graders to get vaccinated for meningitis and to receive a booster shot before entering 12th grade. Republicans are dismissing the medical consensus, choosing instead to side with parents and chiropractors who say a mandate is unnecessary given adverse reactions, low rates of meningitis and already high rates of voluntary vaccination among school children.

Low rates are the result of vaccines, right?

Fringe Control of our Legislature: Who wants those 12 percenters dominating public policy. Who elected them?

Among the skeptics is Madison Elmer, the organizer of this month’s rally against Gov. Tony Evers’ stay-at-home order, and members of Wisconsin United for Freedom, a group critical of the safety of vaccines, fluoride and 5G wireless towers.


Republican objections to the recommendations of medical experts come after they forged ahead with the April 7 election despite warnings it would spread the virus and continue to pressure Evers to reopen the state.

“Kids in Wisconsin are theoretically being left at more risk than other areas,” said Dr. James Conway, a pediatric infectious disease expert at the UW-Madison School of Medicine and Public Health.

Despite GOP objections, the requirement could still go into place after the administrative rules process is completed. The CDC recommends the meningitis vaccination for children, as do the Advisory Committee on Immunization Practices and the American Academy of Pediatrics. Illinois, Iowa, Michigan and Minnesota all require at least one dose …

Worse than Walker? Yes, Republicans are now further right than even Scott Walker wanted to go:


The state Department of Health Services, the agency charged with overseeing the state’s immunization program, began the process in 2017 under Republican Gov. Scott Walker to bring state requirements in line with CDC recommendations by adding the meningitis vaccine to those required for students entering the seventh grade, and the booster for incoming seniors.

Last week, the six Republican lawmakers who control the Joint Committee for Review of Administrative Rules voted to temporarily object to the requirement on the grounds it is “arbitrary and capricious.”

Anti-Logic Republicans use success of vaccinating and low disease rates to oppose vaccinations:


Mike Mikalsen, a spokesman for Sen. Steve Nass said those rates reduce the need to mandate the vaccine, given concerns about side effects. “The numbers have been going down,” Mikalsen said. “The need to make it mandatory, it’s not there.”

Who wants to scream here? I am now:


When immunization rates dip below 80%, Conway said there’s not enough group or “herd” immunity, and outbreaks of disease become a concern. All the states around us require the meningococcal vaccine for kids,” Conway said. “We’re kind of the outlier on this one.” Conway said both COVID-19 and meningitis can mimic the flu in their early stages. Risk is highest for those ages 16 to 23 and for infants.