This is just one week:

1. COMMUNIST: My QAnon terrorist in Milwaukee is obsessed with the word "COMMUNIST." Here's a string of recent comments from someone I've know since I was a teenager:

"...you're not proud of the flag you're not proud to be an American you can make any s*** you want up that's what morons Communists."    "Spoken like a true communist."    "That's how Communists think."     "Very communist  non-American."     "...that's really very communistic you're a communist John you belong in a party that hates."

So I made up some nonsensical stories, to see if he could tell the difference. He didn't question one:

2. TRUMP REVENGE TOUR: I found the following Rumor Lux parody promotion at Patreon. My Trump cult friend sent me this, thinking it was real: "This is absolutely BS. It's all crap this is Fantasyland."  Note: "Fantasyland" is another popular QAnon word:

6. Right-wing Heritage Action for America's one-size-fits-all nationwide Voter Suppression laws Exposed: "So it has that grassroots, you know, bottom-up kind a vibe:"

7. Republican Born: WI Black Historical Society funding dismissed, surprise, their voters never asked for it. NOBODY ASKED FOR IT...EXCEPT the Governor in his budget. But he's a "nobody," right?: 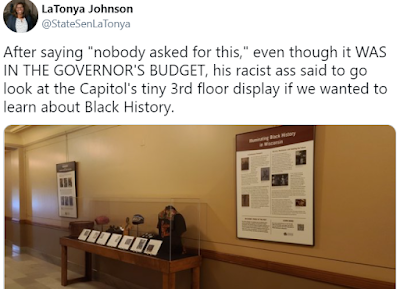 On Capitol City Sunday, Born lied and denied referring Sen. LaTonya Johnson to a small display in the Capitol as an example of Black history being honored by the state:

8. Dumb Ron Johnson now stands for choice? Yea, the choice not to get vaccinated this time: 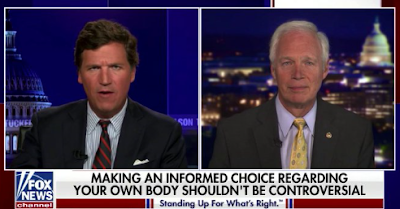 9. US Generals say Biden illegitimate, the Election a Fraud: The first warm week, and all this happens:

More than 124 retired US generals and admirals have published an open letter suggesting that Joe Biden was not legitimately elected as President and questioning his fitness for office. Calling themselves ‘Flag Officers 4 America’, they said that America is “in deep peril,” having “taken a hard-Left turn toward Socialism and a Marxist form of tyrannical government”.

The letter from US retired military leaders said: “Without fair and honest elections that accurately reflect the ‘will of the people’ our Constitutional Republic is lost,” and claimed that the FBI and Supreme Court “ignored” irregularities in 2020. The group also questioned the “physical and mental condition of the Commander in Chief” and claimed that questions had been raised about who is really in charge.

10. WI Trump Republicans Mandating National Anthem? It's just a game to them... 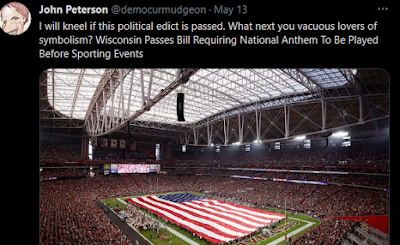 11. An avalanche of Trumpism continues: 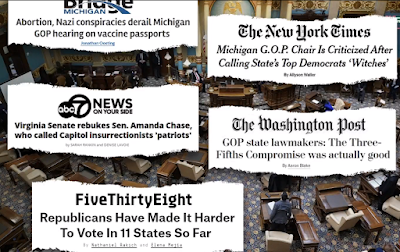 Wait, one more recent twist on restoring the integrity and confidence in elections: 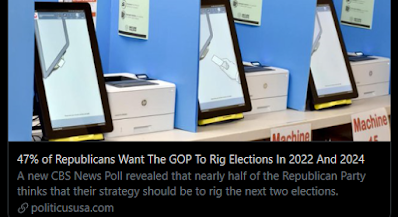 53% say the party needs to focus on message and ideas to win over more voters, but 47% say the GOP already has enough voters and should focus on pushing for changes to voting rules instead.