I don't usually devote much blogging time to out-of-state Republican lunacy, but Florida's Gov. Ron (dead-eyes) DeSantis, gearing up for a presidential run, and his Republican majority are just cranking out fantastical rights and restrictions no where seen in the Constitution. It's also a sign of fascism, but more on that later.

Let's start with the little known "spirit" right, that insinuates a meaning in sloppily written executive orders. Also, I don't think it's in the Constitution. 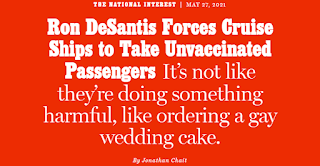 YahooNews: Several Republican-run states have enacted laws forbidding private businesses from requiring proof of vaccination. The reductio ad absurdum of this stance comes via Florida governor Ron DeSantis who said Thursday that Celebrity Cruise's requirement that 95 percent of all passengers over 16 be fully vaccinated "violates the spirit" of an executive order he issued barring "vaccine passports," as well as a state law that goes into effect July 1st (that) will "subject a fine of $5,000" for each customer asked to show vaccination status.

Harmful for society? Because 59,202 COVID deaths nationwide isn't harmful?
Running counter to the goal of a Republican utopia of open businesses and a thriving economy...

Dr. Jay Wolfson, a public health and law professor at the University of South Florida, told WTSP 10 Tampa Bay. "They're not a Florida company. It really protects the economic viability of the cruise ship industry."

2. Stopping Social Media from banning Politicians, who are Victims of their own Dumb actions: In rapid succession, DeSantis also took the action below...Note: There seems to be some confusion over an available private business product and a consumers freedom and liberty to use or not use that product.

First, you have to believe "Silicon Valley elites" were seeking to censor conservative political views.

"What we've been seeing across the U.S. is an effort to silence, intimidate and wipe out dissenting voices by the leftist media and big corporations," DeSantis said in a statement.

The laws justification is fabricated victimhood because...:

This is lawmaking based on paranoid fantasies of Republican legislators, and they're passing this on a nationwide scale. The real stuff? Well, that's just liberals playing  politics:
Oddly, no word yet on challenging this monstrosity in the courts, but soon I hope. Note: Remember when Republicans opposed California's strict regulations on car emissions because it forced those same standards on other states simply by default. What about this?

Carl Szabo, vice president and general counsel at NetChoice, a tech industry trade group, said the law may force platforms to carry posts that include violence or other harmful content.

"By forcing websites to host speech, this bill takes us closer to a state-run internet where the government can cherry-pick winners and losers," he said in a statement. The First Amendment prohibits the government from compelling or controlling speech on private websites, he added.

Fascism? It sure is. Wikipedia:

Fascism is distinguished by an absence of coherent economic ideology and an absence of serious economic thinking. The decisions taken by fascist leaders cannot be explained within a logical economic framework, other than a general desire that the economy should help build a strong nation. As such, scholars argue that fascists had no economic ideology, but they did follow popular opinion, the interests of their donors . In general, fascist governments exercised control over private property, but they did not nationalize it.

Just an experiment, I'm going to insert highlighted current events and pictures in the continuing definition below:

Fascist regimes generally came into existence in times of crisis (like the pandemic, BLM protests, insurrection), when economic elites, landowners and business owners feared that a revolution or uprising was imminent (the destruction of property during protests). Fascists allied themselves with the economic elites, promising to protect their social status (CEO compensation jumped 16 percent in pandemic) and to suppress any potential working class revolution.

In exchange, the elites were asked to subordinate their interests...

...to a broader nationalist project, thus fascist economic policies generally protect inequality and privilege while also featuring an important role for state intervention in the economy.