Thursday Dec. 10, 2020: Sure I think Republicans will try to reject the Wisconsin election results and replace the state's electors with Trump supporters, but beside that, their other bigger objective is to reign in or stop the expanded opportunities to vote that made our last election so much easier.

Forget talking to election officials, isn't it better to get opinions and anecdotal stories of fraud from the GOP central casting, picking Trump cultist QAnon conspiracy theorists and a radio talk host? Yes.

Get ready for some real voter suppression folks:

A month ago, Republican lawmakers said they were prepared to issue subpoenas for the first time in decades to haul election officials before them to get answers about how the presidential contest was conducted.

But they have now abandoned that plan and aren’t even bothering to invite them to attend a Friday hearing looking into an election that Democrat Joe Biden won by about 21,000 votes in the state.

Instead, they’re asking to hear from a conservative radio talk show host, a former state Supreme Court justice, a postal subcontractor who has offered a debunked theory about backdated absentee ballots and an election observer whom President Donald Trump wants to testify in court in one of his lawsuits over the election.

Democrats on Tusler's committee said in a statement that Friday's hearing will likely "be a forum for debunked conspiracies and outright lies."

It’s unclear how lawmakers could change the results even if they wanted to do so because state law requires the governor to sign off on the state’s slate of electors.

Friday Dec. 11, 2020: Well, this started off well. Guess who's sending the message masks-are-ridiculous to their conservative constituents?: 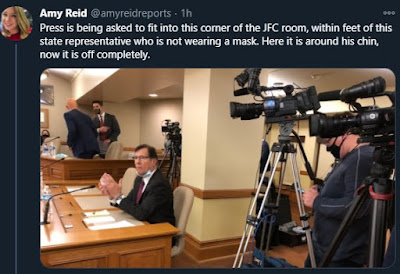 NBC15: Saying “we have heard enough,” five Democratic members of the Wisconsin Assembly’s Committee on Campaigns and Elections declare they will no longer participate in Friday’s hearing investigating allegations of illegal activity during the November presidential election.

“After a morning of wild conspiracy theories that went unchallenged and uncorrected, it is clear that today’s joint hearing is exactly the kind of disgraceful display that we all feared it would be."

Describing it as a “sham hearing,” they argued the hearing does not focus on what lawmakers should be prioritizing, pointing to COVID-19 relief as an example. “This hearing does nothing but undermine our elections and election officials. Witnesses attacked our clerks and poll workers while Republicans gave them no serious opportunity to respond,” they continued.

In written testimony, more than a dozen municipal clerks and election inspectors criticized lawmakers behind the public hearing for inviting testimony largely from conservative partisans and allies of President Donald Trump.

Village of Camp Douglas clerk Sarah Stark said in testimony she was "downright ashamed" of the persistent cries of election fraud, including from elected officials.
"We take the job of administering elections very seriously," Stark wrote. "What you are doing is telling each and every one of the 1,852 Municipal Clerks is we committed election fraud. I just can’t comprehend how you can begin to think that we all rallied together to commit this fraud on a municipal, county, or statewide level. This has to stop."