"Democratic victories do not count, because Democratic voters are not truly American" say Trump cultist culture.

The sad fact is, there are no consequences for trying to overthrow our democracy by throwing out an election, especially those in certain heavily Democratic counties that play by the same rules as every other county in the state. And there likely won't be any.

The latest? Two numbskull Republicans who don't know who the Senate Majority leader is: Remember who they are... 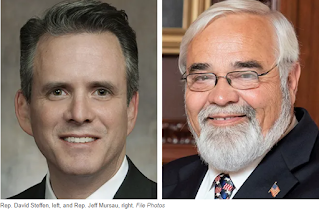 JSOnline: Two Republican state lawmakers are suing Gov. Tony Evers as part of a federal lawsuit to overturn the results of the 2020 presidential election in Wisconsin, Arizona, Georgia, Michigan and Pennsylvania … having governors certify electors without support of state legislative bodies violates the U.S. Constitution.

Reps. Jeff Mursau, David Steffen, and Debbie Jacques who is running to replace outgoing state Rep. John Nygren are plaintiffs in a lawsuit court against officials in all five states, including Evers, Assembly Speaker Robin Vos and Sen. Howard Marklein, who is listed in the lawsuit as Senate majority leader but does not hold that position.

And of course, confident gerrymandered Republicans are trying to make themselves the one super powered branch of government, because well, who cares about the Governor. Uh, who's creating disorder?

The Heart of the Steal: Here's The Atlantic's Adam Serwer describing what I've already seen so many times whining out of my Trump-cultist friend in Milwaukee, someone I've known most of my life:

To Trump’s strongest supporters, Biden’s win is a fraud because his voters should not count to begin with, and because the Democratic Party is not a legitimate political institution that should be allowed to wield power even if they did.

This is why the authoritarian remedies festering in the Trump fever swamps—martial law, the usurpation of state electors, Supreme Court fiat—are so openly contemplated. Because the true will of the people is that Trump remain president, forcing that outcome, even in the face of defeat, is a fulfillment of democracy rather than its betrayal. The Republican base’s fundamental belief, the one that Trump used to win them over in the first place is that Democratic victories do not count, because Democratic voters are not truly American.

Which means using the nations military to oversee a redo election is the next step:
SUCKERS!!! All the while Trump-cultists were being tricked by a foreign government, and playing the willing fool by threatening violence and death for the hell of it:

WP: The FBI has concluded that Iran was behind online efforts earlier this month to incite lethal violence against the bureau’s director, a former top U.S. cyber expert and multiple state elections officials who have refuted claims of widespread voter fraud promoted by President Trump and his allies, federal and state officials said Tuesday …a dozen people whose ­images, home addresses and other personal information were posted on a website titled “Enemies of the People.” Crosshairs were superimposed over the photos.

Trump's silent Mob-like expectations of Violence: Like so many mob bosses, their thugs know what to do...

“I’ve definitely had some extra police protection,” Hagedorn told WISN 12. “Not just me but some of the justices because of some of the things directed our way. I’m not aware of any specific death threats necessarily. There are some things that are concerning and not fun as a father of five children to hear. It’s been the case that my 12-year-old daughter asked me at one point, ‘Dad can we play in the front yard today or should we play in the backyard?’”

And right-wingers have GOOD RIOTS supporting America against liberal politicians locking down during a pandemic...
Guns, guns, guns. Feeding their own Stereotype:

The Atlantic: Armed protesters gathered outside the home of Michigan Secretary of State Jocelyn Benson demanding that she overturn the results of the 2020 presidential election in her state. “We will not stand down, we will not stop, we will continue to rise up, we will continue to take this election back for the president that actually won it by a landslide,” one protester at the scene declared, NPR reported. In a state where Trump-supporting militants were caught plotting to kidnap the governor, Gretchen Whitmer, is obviously disturbing.

And yet, challenging a close 6 vote win by a Republican is outrageous? Bypassing the courts due to lack of time...

Many of the same people criticizing Iowa Democrat Rita Hart's decision to contest the result of the race for Iowa's 2nd Congressional District, which she lost by six votes, have vocally defended Trump's attempt to overturn his 2020 presidential election loss to Joe Biden, whose total of 306 Electoral College votes Trump once called a "landslide."

Hart formally asked the House to review uncounted ballots that she believes could reverse her defeat last month. Republicans were quick to lambaste Hart for challenging the vote count in what they charged was a "political" move …"Rita Hart's attempt to leapfrog Iowans and our judicial process in favor of Nancy Pelosi's partisan process demonstrates a lack of respect for Iowa's election results," Iowa Gov. Kim Reynolds tweeted on Tuesday. "Disappointed that Rita Hart has chosen a partisan political process to overturn @millermeeks's victory in #IA02," agreed her lieutenant governor, Adam Gregg.

Too Easy to Vote, Suppression Next? Will voters now allow their own representatives to suppress their vote? Why not:

Georgia Republican lawmakers have claimed - without evidence - there is widespread fraud with absentee voting … The necessary ingredient is not actual voter fraud, but Democratic victory at the ballot box, real or potential.

NPR's FOWLER: So GOP state senators say they want to get rid of no excuse absentee voting, add more photo ID requirements for those who do vote by mail and eliminate secure drop boxes as an option to return. Democrats questioned the sudden change of heart. Representative Renitta Shannon, says "I just don't remember from other Republicans there being such an attack against absentee voting when it was mostly Republicans using it. So it seems to me that this new kind of upspring about Democrats, largely Black and brown voters, who are using mail-in voting as of this year so much - it just really seems interesting.