Are we trying to give Republicans, including Scott Walker, a pass on their public education legacy following Act 10? I think yes?

My head is exploding over the recently released 2019 Student Assessment Scores and the coverage.

Republicans Attack Teachers and Slash School Funding: Let's start with the first obvious story that should point voters to the guilty party: Republicans and the 8 years of trashing teachers and public education.

WSJ: Wisconsin has had the second deepest slash in per-student spending in the nation since 2008 — second only to Alabama — according to a study by the Center on Budget and Policy Priorities. Alabama and Wisconsin led the list of at least 35 states providing less funding per student than they did before the recession hit.

Surprise, Teacher Exodus and Vilification took Toll: Scott Walker and the gerrymandered Majority Republicans started the ball rolling with Act 10. And they were warned, but...

CapTimes: Tim Slekar, the dean of Edgewood College’s School of Education, regularly meets with about a dozen prospective students each semester. “I’ve sat here and done it more than once where an interested student and their parents come in, and the parents say, ‘Yeah, she wants to be a teacher but we told her we’re not supportive of that decision.’”

...students see experienced educators leave the profession earlier than anticipated. Of those who leave teaching before retirement age, many cite a lack of support from school administrators as well as high stress and low morale.

Take notice conservative voters, Republican Rep. Robin Vos is once again trying to pass blame, to distract you by feigning outrage over something he was responsible for:

JS: Less than half of Wisconsin students again this year are considered to be proficient in reading and math — a trend Assembly Speaker Robin Vos on Thursday called "disturbing." "Wisconsin students deserve an excellent education no matter where they attend school ... taxpayers deserve to know why we’re not seeing better results.”

Hey, Look at the Voucher School Scores!!! I didn't even know "choice" voucher schools were included in the state average until I read this in Molly Beck's JS coverage: 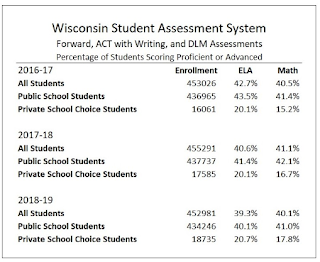 Who Knew Online "Virtual Academy," was the Biggest Waste of Money? We did: Virtual schools nationwide are a disaster, but they are still allowed under the privatization banner to exist and drain even more taxpayer money. McFarland knew this but backed the idea anyway. McFarland even managed to keep Wisconsin Virtual Academy's scores from being averaged into the districts public school results. That should tell you something: 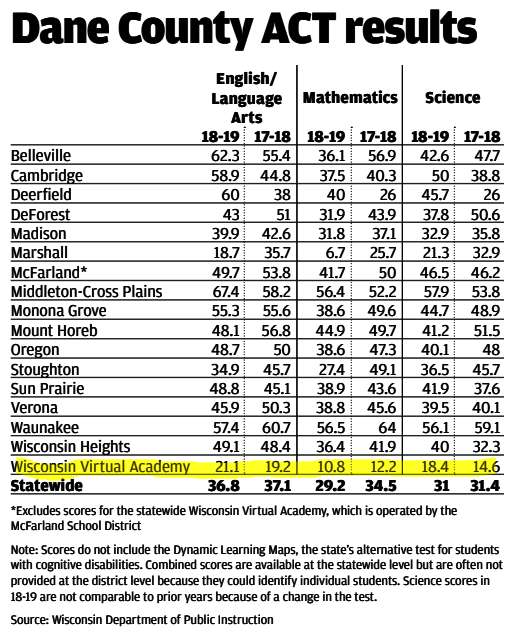 One question remains; where are the Democrats hiding? Why hasn't Gov. Evers come out with a statement?
Posted by John Peterson, Democurmudgeon at 9/13/2019 02:10:00 PM