Universal health care, or Medicare-for-All, would simply make every doctor your doctor and every hospital your hospital. Your current doctor will continue to see you and you would no longer be confined to a restrictive "network" of medical providers.

Clarification; insurers do not have doctors or hospitals, they're just insurance companies trying to make a profit, denying claims and requiring massive co-pays and deductibles that saves them money.

Remember, everything presented here would not be an issue with a national universal health insurance program.

People Love their "cheap" Employer Health Insurance? They shouldn't: Republicans have repeated the industry talking point that workers would lose their employer-provided insurance. They're not losing anything, because they will still have universal health insurance. What we're finding out now is that employer insurance is getting very expensive for employees: 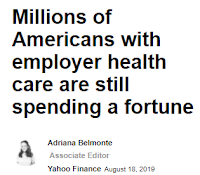 Research indicates that a sizable group of people with employer health care, an estimated 23.6 million Americans, are still spending a ton on their medical bills ... with high premium contributions, high out-of-pocket costs, or both. The report goes against the notion that employer health plans mean lower health care costs.

According to the Commonwealth Fund (TCF), “employer plan premium contributions and out-of-pocket costs, are eating up an increasing portion of household budgets ... a steady growth in the percentage of people who are insured all year but have high out-of-pocket costs relative to their income and deductibles” to the point that “they’re considered underinsured. The biggest growth in that trend is occurring among people who have employer plans.”

And while universal health insurance may cost $32 trillion over 10 years, or $3.2 trillion a year, look at what we paid in 2017, with increasing high deductibles, co-pays, monthly premiums, and with approximately 27.5 million uninsured people and rising: 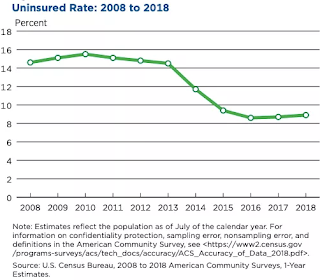 Republicans incorrectly claim the federal Medicaid insurance program is like welfare. They would also like you to think it's filled with abusive freeloaders, when in fact, people only use Medicaid when they need medical care, and that's not very often. So why not cover everyone? 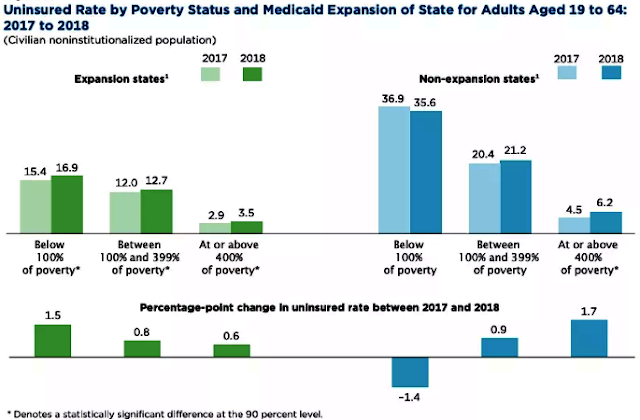 GM Striking Workers Negotiating Health Insurance, then get Cut off: Unions are still arguing that they worked hard to get great health insurance plans, when in fact, a national universal insurance program would provide the same benefits. From NPR, this report about how important health insurance is to their union talks, an issue we wouldn't have with Medicare-for-All:

But then this brutal negotiating tactic happened...

Prior Authorization Nightmare: For chronic conditions, the idea of prior authorization is just crazy. Under universal health insurance, this would probably be unnecessary. This is also an issue that could save money that might not have been factored into the government's estimates:

When common chronic conditions such as diabetes are well controlled, it prevents worsening disease and saves money for the health system and the patient. But Ric Peralta says his efforts to use this new tool consistently to manage his diabetes have been stymied by insurance problems ... The newest Dexcom continuous glucose monitor has three parts.

For each of these parts, Peralta needs something called a "prior authorization" from his insurer ... But he also has to get prior authorization for each supply, meaning every three months his doctor needs to reconfirm with his insurance company that the sensors are medically necessary. Same goes for the device's transmitters

"In my practice we have five individual physicians, and we hired five full-time employees whose primary duty is obtaining prior authorization and dealing with insurance companies," says Dr. Bruce Scott, an otolaryngologist from Kentucky and Vice Speaker of the AMA House of Delegates.