These were the most obvious and startling stories to come out this week. And it explains a whole lot about Trump's 19th-century authoritarian "Gilded Age" mentality.

1. Make Auto Emissions Worse: It all seems surreal, doesn't it? Trump attacked California for having tougher environmental standards on auto emissions than the nation, and then legally went after automakers who agreed to and wants to produce cleaner-running cars. So much for market forces? MSNBC:


NBC News’ Jo Ling Kent reports on the Trump administration’s attempts to actively sabotage efforts by the state of California and major automakers to raise emission standards above the national average. Aired on 09/20/19.

2. Climate Hoax, not a Hoax according to Exxon in the 70s and early 80s: Here's something I didn't know about climate change, and what Trump cultist believe is a global hoax; climate change was a serious concern by Exxon scientists before they realized their research would negatively affect their profitability:


Exxon: The oil giant's top scientists were clear-eyed about the potentially devastating impact of fossil fuels. But the company chose to raise doubts among the public. Exxon issued a statement in response to our story: "Reports that claim we reached definitive conclusions about climate change decades before the world’s experts are inaccurate. Climate change is a serious issue & it’s going to take efforts by business, governments and consumers for meaningful action."


3. Trump Impatient with Long Dishwasher Times: You can't make this stuff up? But then, Trump and the Koch group FreedomWorks just did...:

“Dishwashers used to clean a full load of filthy dishes in under an hour. But now they take an average of two and a half hours and STILL leave dishes dirty!” reads one online petition promoted by FreedomWorks, a libertarian offshoot of a group co-founded by the late David H. Koch. The decline of American dishwashers, the site says, is “all thanks to crazy environmentalist rules.”

The petition, titled “Make Dishwashers Great Again,” ... Trump administration emails made public as part of a lawsuit shed new light on the effort ... One such email, sent in June 2018 to supporters of the Competitive Enterprise Institute, a libertarian think tank, urged them to write to the Department of Energy supporting the creation of “a new class of ‘fast dishwashers’ that can complete a cycle in an hour or less.”

“The light bulb. People said, ‘What’s with the light bulb?’ I said, ‘Here’s the story.’ And I looked at it, the bulb that we’re being forced to use, number one to me, most importantly, the light’s no good. I always look orange. And so do you. The light is the worst,” Trump said.

5. Trump Pollution NOT so Pro-Life! On a much more serious note... 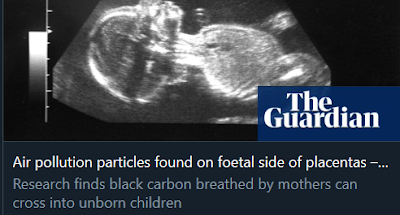 Air pollution particles have been found on the foetal side of placentas, indicating that unborn babies are directly exposed to the black carbon produced by motor traffic and fuel burning.

The research is the first study to show the placental barrier can be penetrated by particles breathed in by the mother. The link between exposure to dirty air and increased miscarriages, premature births and low birth weights is well established. The research suggests the particles themselves may be the cause, not solely the inflammatory response the pollution produces in mothers.

Damage to foetuses has lifelong consequences ... A comprehensive global review concluded that air pollution may be damaging every organ and virtually every cell in the human body. Nanoparticles have also been found to cross the blood-brain barrier and billions have been found in the hearts of young city dwellers.

Here are a few tweets to reflect on: