Wisconsin Republicans to Voters; "We're tired of seeing that MOB and the PROTESTERS everywhere." 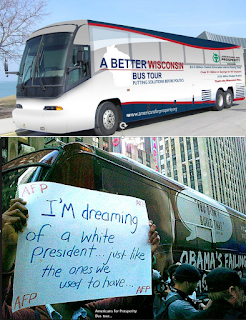 The way I see it, Republicans have always hated getting out of their easy chairs to protest. That's why they hated the 60's war protests so much. In fact, it got so bad in 2011 that the Koch brothers Americans for Prosperity used buses to transport whoever they could find from around the state to
protest in Madison (there weren't many), where a thuggish "mob" of liberal teachers, firefighters, law enforcement, students, families, and children turned out by the millions to protest Scott Walker's union-busting Act 10.

Liberal protests weren't always considered "mobs." Republicans struggled at first to make the First Amendments "right of the people peaceably to assemble and to petition the Government for a redress of grievances" an unthinkable and grotesque assault on American values.


“You all will misconstrue things the way you see fit. But I think it’s pretty clear, that’s the closest thing I have in terms of handling a difficult situation, not that there’s any parallel between the two.”

Walker's image of being "unintimidated" was just exposed as BS by a former Walker secretary speaking out against his reelection. Peter Bildsten, Former secretary of the Wisconsin Department of Financial Institutions:


When Walker titled his 2013 book Unintimidated and bragged about how he “stood up to union thugs and protesters,” I thought back to how he had regularly ducked in and out of the capitol via a tunnel, always escorted by a heavy security detail. Unintimidated is not exactly the word that comes to mind, but Republicans in Washington accepted Walker’s self-image and talked him up as a strong presidential contender. 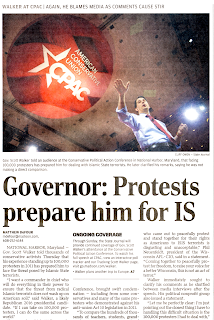 MICHELLE: "The other thing is the Kavanaugh effect. I think it comes down to that MOB MENTALITY that we went through in 2011-2012. We had people come out and vote for Scott Walker during that recall who did not support what he did in Act 10, but they we're tired of  seeing that MOB AND THE PROTESTERS everywhere. We are hearing that candidates are hearing it at the doors and hearing it at the polls as well, that people are tired of that MOB mentality, and they feel that the Kavanaugh family was treated poorly. They don't want to see that anymore. They want that to be done. They want people to get along. And I think the Democrats are going to be punished for that."

MIKE: "I will give John a chance, because I'm sure the mob thing for you, knowing what you have written in the past, it probably does not sit well with you...''

JOHN: "I do not think my mom, her other friends from Burlington who came up to defend public education with nurse and teachers, were a mob. There are things to say about the tea party folks too. And you know, this notion of trying to make the other side into somet sort of an evil force..."


Mobs are Enemies in "life and death battle for the future." Awhile back Republicans were talking like James Buchal, a Portland-area GOP Chairman, who really did want to hire militia groups as political security. Imagine how much worse things are now with roving liberal "mobs" endangering the survival of our country. It's impossible for me to wrap my mind around people who think like this:


The top Republican in the city said he is considering using militia groups as security for public events. James Buchal said: “Yeah. We’re thinking about that. Because there are now belligerent, unstable people who are convinced that Republicans are like Nazis.”


He says of the President, “His enemies are my enemies and his enemies are all our enemies. Our enemies are more dangerous than ever. We are really in a life and death battle for the future of our society. And these globalist people are not going to give up. If we don’t tell out fellow citizens that there are these dark forces in the government, like the CIA and the shadow government, who are trying to take Trump down with lies, who is going to tell them?”