Walker Republicans to Limit Governor Evers powers..."Geez, have we made mistakes giving too much power to Gov. Walker...?"

When you've got nothing else to lose, and a compliant voter base that doesn't care, you get this:

It's odd how "the people

Funny, now Assembly smirker Robin Vos is thinking, "Geez" maybe they gave too much power to Walker? You can't make this stuff up:

"If there are areas where we could look and say, 'Geez — have we made mistakes where we granted too much power to the executive,' I'd be open to taking a look to say what can we do to change that to try to re-balance it. Maybe we made some mistakes giving too much power to Gov. (Scott) Walker and I'd be open to looking at that to see if there are areas we should change that, but it's far too early to do that before I talk to Scott Fitzgerald." 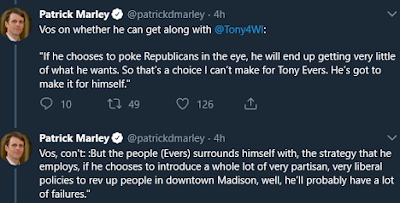 
Vos said last month he would never go along with such a plan. "Not going to happen. No way. Never. Medicaid right now does not pay the cost of your provider. So the more people we put into Medicaid, the more the private sector will have to pay to subsidize those who are on Medicaid. So all it does is make the private system less stable."


Vos underscored that Wednesday by pouring cold water on plans Evers' campaigned on, including adding $1.4 billion in new funding for schools over two years.
"That's not possible unless you have a massive tax increase. It literally cannot be accomplished without either taking from some to give to another or a massive tax increase."

Vos also said he wouldn't support "putting a bunch of money into empty buses," referring to mass transit solutions to transportation woes, but would consider a plan that puts money into fixing roads and bridges.

Evers spokeswoman Britt Cudaback said it's "unfortunate Vos is doubling down on division" after Evers asked to set aside differences and work together.


"These are the same desperate antics of politicians hell-bent on staying in power after eight year. The people of Wisconsin deserve better from our government, and that’s why they voted for a change yesterday.”