The Voting Privilege separates have and have-nots!

If I didn't think there were more important economic and health care issues to deal with, I would be out there making access to voting much harder for rural conservatives. Wasn't it Trump Party conservatives hero Brett Kavanaugh who said, "what goes around comes around"?

Wouldn't it be fun to consolidate rural places to vote, institute shorter hours...you know, save money and lower taxes, right?

I heard a report state how Republicans in states purging voter rolls and limiting polling places believe voting is a privilege and not a right. Really? It seems those rights are spelled out a number of times in the Constitution: 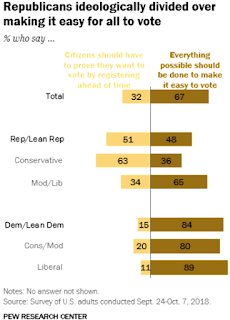 Voting rights cannot be denied or abridged based on the following: "Race, color, or previous condition of servitude" (15th Amendment, 1870) … 1913: Direct election of Senators, established by the Seventeenth Amendment gave voters rather than state legislatures the right to elect senators. 1920: Women are guaranteed the right to vote by the Nineteenth Amendment to the United States Constitution.

Authoritarian Leaders like Trump call all the shots: Privilege. Every Trumpian drooler is proof:

Here's one example we saw in Wisconsin, when Republican Rep. Duey Stroebel proposed this whacko idea:


The measure proposed by Rep. Duey Stroebel, R-Saukville, would prohibit clerks from opening early, late or on weekends to accommodate voters wishing to cast their ballots before Election Day … the bill aims to give residents of smaller communities the same access to absentee voting as those in larger communities that can afford to hold extended balloting ... people in rural areas don't have the opportunity to vote on weekends or evenings.


The proposal could be even more vexing for clerks in small towns, who often work part-time and at the convenience of local residents, said Richard Stadelman, executive director of the Wisconsin Towns Association … it's not unusual for small-town clerks to open their offices on nights and weekends to accommodate in-person absentee voting. He said his group opposes the bill as written.

Don’t laugh...but Stroebel then reversed his own attempt bringing equality to the system:


Stroebel plans to amend the bill to add flexibility for small communities.

Purging Voters Big Success Too: Defying human nature, the conservative activist Supreme Court allowed postcard address confirmations to stand. So people don't throw stuff like that away or say it's nobodies business where they live?


The Supreme Court on Monday upheld Ohio’s aggressive efforts to purge its voting rolls, siding with Republicans in the latest partisan battle over how far states can go in imposing restrictions on voting.

The court ruled that states may kick people off the rolls if they skip a few elections and fail to respond to a notice from election officials. The vote was 5 to 4, with the more conservative justices in the majority.

Justice Breyer wrote, In 2012 Ohio sent out 1.5 million notices, to roughly 20 percent of the state’s registered voters. But only 4 percent of Americans move outside their county each year, he wrote.

And then there's this amazing suppression story:

U.S. District Court Judge Daniel Crabtree said forcing Ford County Clerk Debbie Cox to open an additional polling location in Dodge City so close to the Nov. 6 election would not be in the public’s interest. But Crabtree said he is troubled by Cox’s reaction to an American Civil Liberties Union letter, which Cox forwarded last week to a state official with the comment “LOL.”

Cox moved the city’s only polling place from a central location in town, the Civic Center, to the Expo Center half a mile outside the city limits this fall. The new location is not accessible via sidewalk and there is no regular public transportation there, though the city has said it will provide rides to voters.

Or this intimidation and suppression effort in Georgia:


Georgia Secretary of State Brian Kemp, the chief elections official in the state, is a pioneer of present-day voter suppression. Mr. Kemp has a record of making it harder for people to register to vote, and more difficult for those voters to remain on the rolls. Since 2012, his office has canceled more than 1.4 million voter registrations. In July 2017, over half a million people — 8 percent of the state’s registered voters — were purged in a single day. As of earlier this month, over 50,000 people’s registrations, filed before the deadline to vote in the coming midterm election, were listed as on hold. Seventy percent had been filed by black applicants.

Since 2012, his office has canceled more than 1.4 million voter registrations. In July 2017, over half a million people — 8 percent of the state’s registered voters — were purged in a single day. As of earlier this month, over 50,000 people’s registrations, filed before the deadline to vote in the coming midterm election, were listed as on hold. Seventy percent had been filed by black applicants.

Olivia Pearson, a grandmother and lifelong resident of Coffee County, Ga., found herself on trial this year oncharges of felony voter fraud. It began six years ago, on the first day of early voting in Georgia, when a black woman named Diewanna Robinson went to cast her ballot. She asked Ms. Pearson, more than 30 years her senior, for help. Ms. Robinson would later testify that Ms. Pearson informed her where the card went in the machine and told her to “just go through and make my own selections on who I wanted to vote for.” Ms. Pearson walked away before Ms. Robinson started voting.

Almost four years later, Ms. Pearson received a letter from District Attorney George Barnhill’s office, informing her that she was facing felony charges for improperly assisting Ms. Robinson. because Ms. Robinson was not illiterate or disabled, she had not been entitled to even minimal verbal assistance.

Over the next two years, Ms. Pearson navigated two trials, two defense counsels, three dropped charges and one hung jury. Finally, in late February, after a 20-minute jury deliberation, she was acquitted of all charges. Six years after her brief interaction with Ms. Robinson, she was finally free.