There's nowhere to go now but...crazy. Trump lies so much now that when he tells the truth, that's news alert stuff.

But lying is only half of Trump's appeal to his devoted obsessed base. They pant even louder when he makes something ridiculous up that can't possibly be true in the real world...unless Trump says so.

Gas Guzzlers Safer, keep us Off the Roads? Enjoy the clip (until MSNBC pulls it) of Brian Williams dryly lays out Trump's latest brain burp: 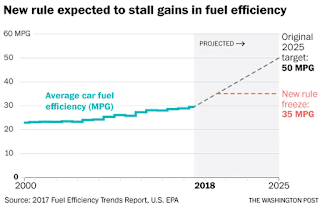 Just in case you don't have time for the video, here are the video captures that tell the whole story. Every Trump mouthbreather will think this makes sense. And even if it doesn't, they won't care: 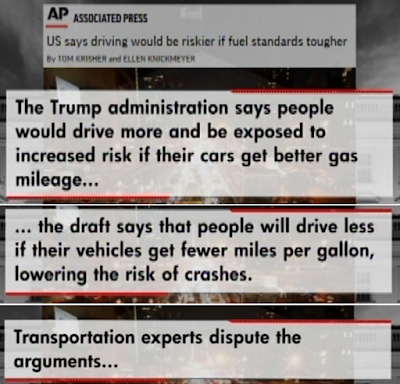 A textbook for a required fitness class at UNC-Chapel Hill is under review by the university after criticism about its content, including statements calling cancer and diabetes “diseases of choice.” It maintains that “many if not most women” who are obsessed with weight have become habitual dieters.

And hell, why not include this bubble world fantasy...


And it describes a theory by Holocaust survivor and Austrian psychotherapist Victor Frankl about concentration camps: “The people in the camps who did not tap into the strength that comes from recognizing their intrinsic worth succumbed to the brutality to which they were subjected.”

Remember, health care is a privilege, for the privileged, or so says Wisconsin's Dumb Sen. Ron Johnson. The Republican Party of ghouls has been telling us this for years, it's just that they didn't come right out and say it. Oh, and add to that the privilege of food and clothing:

“Sen. Rand Paul talked about this on the floor of the Senate. He’s a doctor. He said the minute you consider health care a right, well, who’s going to satisfy that right? And those people who have the skills to satisfy that right, what does that make them if they’re forced to provide you with that rightful product or service?”