This is all about the nonsense argument that downloadable plastic guns are an overblown outrage by people who don't know what they're talking about and not a real threat. That may not be true 5 years from now...or sooner. The avalanche of stories calling all of us ignorant about guns, it's their fallback talking point, was pretty much insulting and the last straw for me.

When the right wing argues that we have inherent God-given rights, not just the ones protected by the Constitution), they're trying to broaden the Constitution beyond its limits. God gave people, those in his image, his stand your ground power over life and death. No one can make a law that regulates God's guns.


Yahoo: Defense Distributed founder Cody Wilson recently said he views having a gun as a “fundamental human dignity” and “human right.” By working to make guns available to anyone without government approval, Wilson wants to shatter people’s faith in the ability to regulate firearms, dealing a fatal blow to gun control arguments.

Plastic printable Guns: We have a right to bear arms, but there is no right your choice of gun or a variety of guns, downloadable or not. Here's the real plan backed by the NRA: 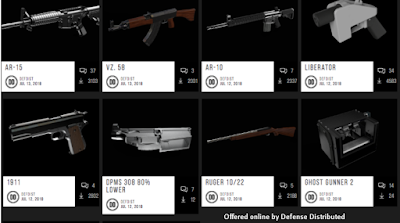 The technology is still relatively primitive right now, and people are already making homemade weapons without much trouble, so this isn’t worth worrying about, the argument goes. Nor can you easily print out lethal plastic bullets. The technology isn’t there, at least not yet.

That kind of circular reasoning is textbook NRA, meant to ensure that we do nothing to address the problem until it’s too late, said Robert Spitzer, a professor at SUNY Cortland who’s written five books on gun policy.


“You go down six months, two years, five years, when these things do start to appear, and then they sort of shrug their shoulders and say you can’t regulate these things, the horse is out of the barn. The public policy question is are these worthy of regulation or even prohibition or restriction in the first place, and if they are, what better time to do it than before they become widely in circulation?”