The Good, Bad and Ugly in Trump (and Walker) Energy News...

Like everything else in Scott Walker's Wisconsin, unless you're a well established major Republican corporate campaign contributor, don't expect to do business here. New and reemerging industries like solar and wind that don't quite fit into the conservative dystopian vision, or haven't been pre-approved by ALEC, sadly won't be allowed to prosper or create thousands or millions of next-gen jobs. We have a Groundhog Day governor.

Even more revealing is the fact that so many other deeply red states are actually moving forward with many of the vilified items I listed above.

Solar Growth Slow in Wisconsin: While the "free market" and so many big energy producers are giving up coal for resource free solar and wind, Walker won't get behind it:

Jim Tinjum, an associate professor of engineering with a specialty in renewable energy at the University of Wisconsin-Madison, (went on a) #bikethewind tour last year ... Tinjum noted that on the solar front, Wisconsin leaves a lot to be desired. “Even though I’m from Wisconsin, I see Wisconsin as playing catchup in the role of advancing solar,” noting that his department teaches a course for solar installers, engineers and designers. He noted that the Wisconsin utility WPPI was a sponsor of his trip, and that he expects to see utilities and other players invest more in solar in the Midwest and Wisconsin in coming years.

Walker's "Sand Rush" feeds draconian Fossil Fuel Thinking: And why is solar and wind on the backburner?  Walker's gift; tearing up the most incredibly scenic part of our state: 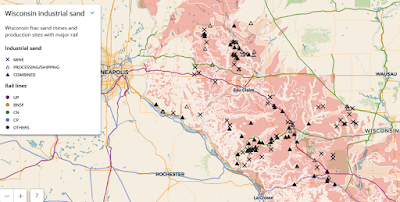 Domestic drilling for oil and natural gas is expected to drive “extreme” demand for the frac sand prevalent throughout western Wisconsin. Wisconsin has historically produced about a third of the domestic supply of industrial sand.

But on the horizon, we're already being told cheaper solar and wind-generated electricity will flip how we're going to heat our homes. Yup, they're now predicting a return to...electric heat.

Where are the "Pro-lifers? "Pollution Illnesses and Deaths Hard to Prove in Court Pt. 1, so...

Reuter: The EPA said it was reconsidering part of an Obama-era rule on emissions of mercury from coal-fired plants. Under the 2011 Mercury and Air Toxic Standards, or MATS, rule, coal plants have had to reduce emissions of mercury, a pollutant that can be dangerous to pregnant women and put infants and children at risk of developmental problems.

The U.S. Supreme Court which left MATS intact in 2015. But it sent one issue, the justification for creating the rule, back to a lower court ... In 2016, the Obama EPA found the costs justified as the rule saved consumers on healthcare bills, a finding that industry challenged.

Mary Anne Hitt, who fights coal plants at the Sierra Club: “This is outrageous and appalling. The American people are not going to stand for (a MATS) repeal just to please a few millionaire coal executives.”

Pollution Illnesses and Death Hard to Prove Pt. 2, so...: This is a subscription story I could not find anywhere else, so here's the screen capture and link. Breathtaking? These are our public servants?

Pollution Illnesses and Death Hard to Prove Pt. 3, so...: We have a right to Life, Liberty, and Property, right? It's right there in the 5th and 14th Amendment. Is it now time to change this meaning too, just like the Supreme Court did with the 2nd Amendment?


National Geographic: Juliana v. United States, a lawsuit filed by 21 children against the federal government over climate change, is headed to trial later this year, after the Supreme Court rejected the Trump Administration’s efforts to derail the case. Justice Anthony Kennedy rejected the government’s request ... noted that the “breadth of the (children’s) claim is striking…” The trial is scheduled to begin October 29 in Eugene, Oregon. The Obama Administration sought unsuccessfully to have the case dismissed, arguing remedies for climate change are better addressed by Congress than in court.

The children’s suit, filed in federal court in 2015 by the non-profit Our Children’s Trust, alleges that the government has failed to protect Earth from the effects of climate change, putting the lives of future generations at risk and violating their basic constitutional rights to life, liberty, and property.

The Interior Department's Freedom of Information Act team uploaded thousands of pages of documents that had not been completely redacted. The next day, officials took down these documents and replaced them. The erroneously un-redacted documents contain facts that cast some monuments in a positive light.

1. One 2017 analysis by the Bureau of Land Management mentioned that once Grand Staircase-Escalante became a national monument, the annual rate of archaeological listings in the area more than doubled, and vandalism dropped. In December 2017, President Trump moved to shrink the monument by 46 percent.

2. In another document, Interior Department official Randal Bowman recommended deleting fishing data from an assessment of the Northeast Canyons and Seamounts Marine National Monument. The administration reviewed the Atlantic Ocean monument—which President Obama created in 2016—amid concerns that the monument's ban on fishing hurt local fishers. Bowman sought to nix data showing that from 2005 to 2014, about two-thirds of the area's shipping vessels generated less than five percent of their annual landings from the waters that became the monument. “This section is based on information provided by NOAA and the Fishery Management Council, and so can be presumed accurate,” he wrote in a comment. “However, including all this information undercuts the case for the ban being harmful.”

So what does the Trump administration propose doing about the slip?

According to legal experts interviewed by the Post, Trump officials could argue that the intended redactions fall under the “deliberative privilege” exemption of the Freedom of Information Act. That clause aims to protect executive branch staffers as they honestly discuss and hone policies.