It's not about Critical Race Theory, it's about preserving and concealing Racist movement today!

After Trump made racism and "replacement theory" an open and acceptable bragging point for his cult followers, some are now trying to repair their long history of racism by banning it.

You'd never know this was a purple voting state: Vos-Republicans in the Assembly voted to
ban critical race theory, a course taught in law school.

Hey Republicans, this is actual Censorship! They just want to make sure kids K-12 and those attending four year colleges don't get the wrong idea about America's struggle with racism. Oh, and they included a grocery list of words and terms critical to explaining race in American history. So much for "academic freedom" and the First Amendment. I highlighted some overly broad terms that would essentially ban everything. Wisconsin State Journal:

There is one positive; this will be an exceedingly uncomfortable question during the gubernatorial debate next year for the Republican candidate. Good luck with that one.

MSNBC's Chris Hayes spotlights our controling idiot's of Wisconsin again, along with a scathing critique from the founder of Equal Justice Initiative, Brian Stevenson. Hint, it's an actual threat to a functioning democracy, not that that matter to MAGAts:

Republicans continue Anecdotal Governing! What could go Wrong?: "Concerns raised by parents" and "I heard someone say" constituent comments are oddly never corrected by gutless Republicans who are too afraid to correct misinformation, or simply say they're wrong.

Bill co-author Rep. Chuck Wichgers, R-Muskego, said the bill follows concerns raised by parents over materials being taught to their children in primary and secondary schools (and) prohibit the same concepts from being taught in universities and technical colleges.

Just as ridiculous, Rep. Robin Vos piled on with a hyperbolic fantasy..."idea"...that teachers would say what he confidently claims they are saying in our schools. Yes Robin, "That is preposterous:"

Well, guess what, it doesn't happen!!!
Words and Concepts Banned from history: Remember when Scott Walker banned references to "climate change," like it wasn't happening, all the while it was happening and getting worse? Well, here we go again. Yet "academic freedom" is a big thing with the college group YAF.
WisTexas Idea or Never a Republican Original Thought: The list of words Vos-Republicans put together were a copy paste job by our lazy legislature. See if you agree after looking at the following poster: 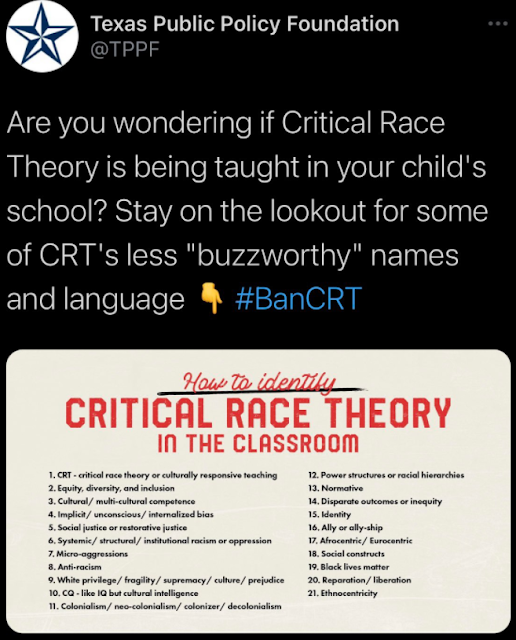 It Could Happen Here: If you were wondering what the Republican end game is, well, wonder no more:

The Johnston Co (NC) Sch Bd was just forced to adopt a new patriotic history policy, after the Bd of Commiss voted to withhold 10% of their budget. They must now teach that all people who “contributed to American society must be presented as reformists, innovators and heroes.” pic.twitter.com/B5X2FwsuAA

How times have changed.

Example #1: Remember when a Marquette University political science professor, who doxed a graduate student by publishing all her personal information resulting in death threats, had his suspension reversed by the WI Supreme Court? This broadened the definition of academic freedom to a surreal level:

In a 4-2 ruling Justice Rebecca Bradley stressed the importance of academic freedom, saying it was being increasingly undermined on college campuses.

"Academic freedom means nothing if faculty is forced to self-censor in fear of offending the unforeseen and ever-evolving sensitivities of adversaries demanding retribution."

Sound insane? Yup, especially when you consider what the Justices overturned:

Milwaukee County Circuit Judge David Hansher ruled in May 2016 that the professor was prohibited by professional standards from bringing negative public attention to a student … Academic freedom, Hansher wrote, "does not mean a faculty member can harass, threaten, intimidate, ridicule.

In late 2016, Murphy asked UW-Madison to cancel a course titled “The Problem of Whiteness” because he said it was inappropriate and a waste of money. School officials defended the course. Two years later it is still listed as a course offered in the spring 2019 semester.

"Attached is yet another example of wasted resources at the UW-Madison/UW Extension to issue a trumped up report from a partisan academic against Right to Work. Hiding behind academic freedom to issue partisan, garbage research is what we have come to expect from some of the overworked and stressed faculty at UW-Madison.

I will certainly forward this email on to UW System President Ray Cross and UW-Madison Chancellor Rebecca Blank, as just one suggestion of a faculty member with time to teach more courses. Or maybe not!"

It’s rare for a governor to attack the flagship university in his own state. First, back in January he proposed an enormous $300 million cut to the University of Wisconsin’s budget, at a time when other state universities are finally recovering from the recession. Now he’s proposing to get rid of academic tenure, not only threatening faculty jobs but also destroying academic freedom for professors at the University of Wisconsin.

Turning Point USA has put together a list of academics that they say discriminate against
conservative students and use their lectures to push their left-wing propaganda. But what about the first amendment?
Example #6: More Steve Nass...

The Progressive: Mike Konopacki, a labor cartoonist who was working on the “Art in Protest” event, is not happy about this outcome … “I’m getting e-mails from artists who are saying, ‘What the hell is going on?’ This is a direct attack on freedom of speech, on freedom of expression, on academic freedom, and on labor education,” says Konopacki. “We were celebrating all the art and creativity that people come up with at these protests. It’s beautiful stuff. We’ve had the largest outpouring of protests in the state’s history, and the School for Workers is not allowed to display this?”

Konopacki is worried that the Republicans in the Wisconsin legislature want to kill the School for Workers … “The School of Workers survived McCarthyism,” he says. “It may not survive Walker.”