Vos-Republicans insert the Courts, Chaos, and Civics into Public Schools one QAnon parent at a time...

It took only ten years under Scott Walker and gerrymandered Republican rule for the dramatic cuts to public education to dramatically hurt students statewide.

Oddly, one Republicans inadvertently admitted their failure as he was introducing his bill to take us back to teaching cursive writing...

Sponsor Rep. Jeremy Thiesfeldt said, “the state of education in Wisconsin is not good,” noting low proficiency rates in reading and math and the worst racial gap in test scores in the country. 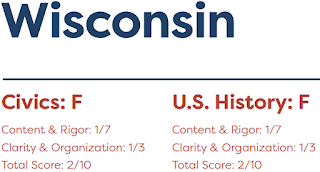 According to the Fordham Institute, the institute recently gave Wisconsin an “F” for the content, rigor, organization and clarity of its civics education efforts.

"Wisconsin’s civics and U.S. History standards are inadequate. In general, they fail to furnish teachers and students with a solid roadmap for high-quality civics and history instruction. A complete revision of the standards is recommended."

And again, another Republican inadvertently admitted his failure implementing a knee jerk and unfunded civics test...

Robin Vos, R-Rochester, wrote in support of the bill in testimony to the Committee on Education that the country is “facing a civics education crisis.” "We need to do a better job of informing our citizens of the vital role we all play in our government. We must fight against civic ignorance.”

"Over the last decade, the state has failed to make up for budget cuts made during the Great Recession. As a result, “in 2020, we graduated an entire generation of kids who have known nothing but austerity in our school funding — who have known years of divestment in their future." (The new) “bill would impose a significant administrative burden on school districts, noting that there is no extra funding included in the bill.

Underly knows exactly what Vos' simple objective is, and how to stop it:

She is calling on Wisconsinites to “stand up to those who want to use our schools to distract and divide our communities."

Vos Chaos, lets Citizens Drag Schools into Courts-what could go wrong? Based loosely on Texas' vigilante use of courts against abortion providers, Wisconsin parents could sue schools for whatever they perceive to be a violation of Vos' convoluted new rules for curriculum "transparency." Note: "STATE to develop curriculum model?"

Any school district resident would be allowed to file a claim that a school district is noncompliant under the bill and if they prevailed in court, the court would award the resident reasonable attorney fees up to $15,000.

This would insulate Vos-Republicans from dealing with the consequences of their new law and put to work the legislatures new legal and private tentacle, WILL.
And don't forget school board races...