So far, Trump cultists and former Democratic voters are happy with Trump's great economy, the same economy the media and GOP mislabeled as stagnant. They're still saying it, Fox News Dec. 28, 2019:

Great Recession denier Walker went on to blame the recessions high unemployment numbers on Obama and his predecessor Democratic Gov. Doyle. Yup, the media let him get away with it.

It's time to take a closer look, with facts that completely contradict Trump's ridiculous lies and tweets he repeats constantly at rallies.

1. President Trump's tariffs on imports ultimately led to 62,000 job losses and $7.1 billion in higher prices for consumers and business, a new study from the Federal Reserve has found: 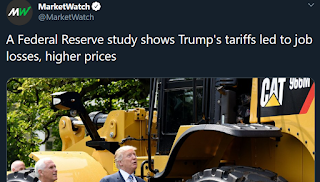 2. Fewer Jobs Created than Obama, so not the best after all: Trump’s job growth falls short of Obama’s last three years

3. Corporate Welfare thanks to Trump Tax Cuts...still like his economy?

379 corporations paid effective fed tax rate of 11.3 percent. In total, 379 corporations enjoyed $73.9 billion dollars in corporate welfare ... ITEP says that 25 of the largest corporations made up half—$37.1 billion—of those pocketed tax dollars. 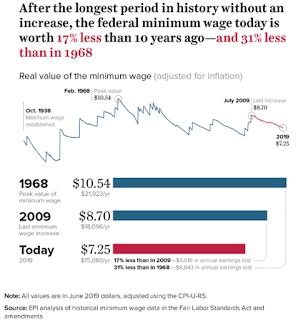 5. Americans happy with Science Free Economic Future: Read below and you'll notice farming, mostly dairy farming, will ironically suffer most: Like journalist Jay Rosen tweeted, this is just one of many issues:

"The refusal to be briefed, the attacks on the intelligence agencies, the put down of the diplomatic corps, the sidelining of science, the rejection of professionalism and expertise across government, the culture war against the press. It's all one thing."

"...relocated two key research agencies to Kansas City from Washington: The National Institute of Food and Agriculture, funds university research on topics like how to breed cattle and corn that can better tolerate drought conditions, and the Economic Research Service, whose economists produce studies for policymakers on farming trends, trade and rural America.

Nearly 600 employees had less than four months to decide whether to uproot and move. Most couldn’t or wouldn’t, and two-thirds of those facing transfer left their jobs.

Mick Mulvaney appeared to celebrate the departures. “It’s nearly impossible to fire a federal worker,” he said in videotaped remarks. “But by simply saying to people, ‘You know what, we’re going to take you outside the bubble, outside the Beltway, outside this liberal haven of Washington, D.C., and move you out in the real part of the country,’ and they quit. What a wonderful way to sort of streamline government..."

At the Economic Research Service, dozens of planned studies into topics like dairy industry consolidation and pesticide use have been delayed or disrupted.

6. Like Paul Ryan, Trump knows more than the Pope and is a better "Christian:"

6. Trump wasted "Best economy Ever" and never invested in Future:

The nation wasted the major economic recovery, according to a new report by Harvard Business School on U.S. competitiveness.
“We had this wonderful recovery. It could have given us the chance to take some significant resources and devote them to some of our well-known challenges, like infrastructure or health care...none of that happened. Instead, we squandered a major economic recovery and didn’t use it to make things better,” said Harvard Business School professor Michael Porter, a co-author of the study.

The overwhelming majority of business leaders surveyed in the report said lobbying primarily advanced company interests, sometimes at the expense of the public interest. More than half (56%) of the general public agreed. Corporations spent an estimated $2.8 billion on federal elections in 2018, according to OpenSecrets; 71% of business leaders surveyed in the report believe the overall business community’s election spending distorted the democratic process, while 60% of the public agreed, according to HBS.

“Employees are getting dragged into this game,” he said, adding: “We don’t see that as democratic principles. We think that’s not democracy where your employer is telling you how to vote and telling you where to give money.”

While unemployment is at a record low and stocks are at record highs, wealth inequality persists. In fact, 65% of HBS alumni ages 18-44 said the U.S. should use the tax system to undertake more redistribution toward lower-income individuals.

“There’s lots of areas where the narrative isn’t exactly right,” Porter said. “For example, we have a lot of people employed, but there’s a lot of data that shows that the people employed are often not getting a living wage, or they’re not being paid for their qualifications. A lot of college graduates in jobs that don’t really compensate them for what they know.”

Porter said the real unemployment rate is closer to 10%