Republicans are convinced voters can't pick their politicians, so they're picking them instead. There's a danger in un-gerrymandered districts that could put families in danger from the sinister schemes spread by liberalism. Whatever happened to having better ideas that appeal to most voters?

WSJ: Paul Ryan ... should support a nonpartisan process for drawing fair voting districts, such as Iowa’s good-government model. Instead, the former speaker of the House is doubling down on gerrymandering ... He’s joining the Republican State Leadership Committee’s fight to defend “RighLines 2020” initiative (with John Boehner and Newt Gingrich). Ryan will help raise millions of dollars “to protect Republican legislative majorities ahead of the decennial redrawing of federal and state district maps.” Seven states are being targeted, including Wisconsin. 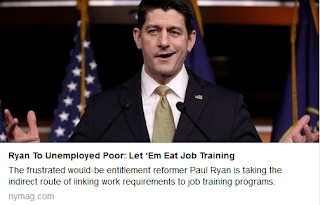 Those are OUR guiding principles? What were those again...and who thinks that?


Thoughts and prayers, because it works? It does? Like doing nothing about 40,000 gun deaths a year, refusing to discuss common sense gun laws, and heck, who doesn't love those active shooter drills in our schools?

Like declaring the ACA unconstitutional, like trying to require work for Medicaid coverage, doing nothing about drug prices, allowing co-pays and deductibles to skyrocket, and adding to the confusing maze of programs no one in their right mind would understand much less utilize.

...(and keep our families) working cannot be overstated." 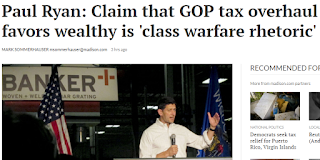 Like our dairy and ag farmers, factory workers, who are all threatened by tariffs, low pay and no benefits...not to mention doing nothing about a dramatically changing workplace tech driven economy?

Ryan wants to protect states from.."liberal gerrymandering...” because liberal Americans are bad, should be silenced, marginalized, and never have a chance to be elected? And this sounds right to conservative voters. Ryan wants to make gerrymandering normal: 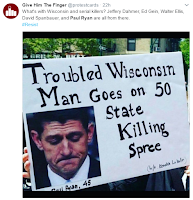 In the 2012 election, a majority of Americans voted for Democratic congressional candidates. But with the help of Republican gerrymanders in states in Ohio, Pennsylvania, Virginia, and other states Obama carried, the GOP won the overwhelming majority of those House districts and kept its majority.

One estimate found that Democrats would have needed to win the popular vote by more than 7 points to gain a House majority. The RSLC bragged openly that its 2010 efforts made that happen.

Boehner warned that "President Obama and Eric Holder failed to transform America into a socialist utopia when they were in office, but they’ve clearly not given up just yet. They’ve recruited liberal billionaires, labor unions, and left-wing activist groups to join them in a coordinated program to rig our nation’s legislative boundaries in favor of Democrats."