AOC Obsession: Scott Walker is a dupe for right-wing spin and propaganda!

You'd think by now projection and the juvenile comment "I know you are but what am I" might appear more silly and manipulative as time goes on, right? Wishful thinking.


As Bonchie wrote earlier this week, Rep. Alexandria Ocasio-Cortez (D-NY) is back in full force ... The results so far have been no less than what we typically expect out of the most narcissistic (and arguably the most hypocritical) Congresswoman in Washington, DC.

Piling on, Scott Walker tweeted that AOC "suggested" Millennial's have now become the "greatest generation." She never did of course, but more embarrassingly, Walker was easily manipulated into believing the spin made by the New York Post and Washington Times. Sucker...see if you can spot where she "suggested" as Walker claims, that Millennial's are the greatest generation:

AOC did just that, acting as though young people pioneered the concept of political activism — and apparently forgetting the ... WWII generation that saved the world from authoritarian rule and dubbed ...“The Greatest Generation.”“I think this new generation is very profound and very strong and very brave, because they’re actually willing to go to the streets. How ’bout that?

The reaction was swift, honest, and never more accurate... 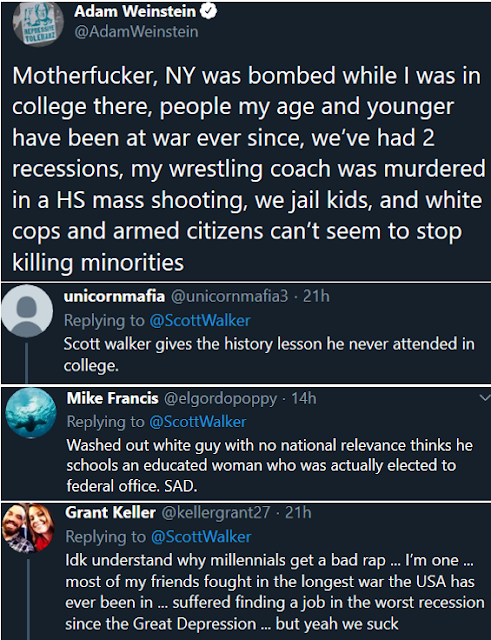