Trump eyeing Internet Censorship on his way to fascist state!

Republicans have always portrayed themselves as victims of censorship, silenced at colleges and in public gatherings, and fearful of being attacked physically by threatening fire-breathing liberals who brandish...a better argument.

Anyone surprised Trump's twisted way of thinking would result in this, censorship by unelected bureaucrats ? 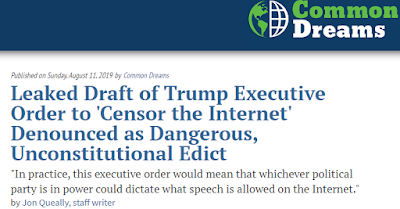 A leaked draft of a Trump administration edict—dubbed by critics as a "Censor the Internet" executive order, that would give powerful federal agencies far-reaching powers to pick and choose which kind of Internet material is and is not acceptable.

Meant to do what campus free speech rights were designed to do, protect radical right-wing nationalism, fascism, and racism, our "small government' Republicans want to call the free speech shots. Read it and weep:

According to CNN, the new rule "calls for the FCC to develop new regulations clarifying how and when the law protects social media websites when they decide to remove or suppress content on their platforms ... also calls for the Federal Trade Commission to take those new policies into account when it investigates or files lawsuits against misbehaving companies."

PEN America warned that any executive order based on this draft rule would be an unconstitutional "anti-American edict.

"It's hard to put into words how mind bogglingly absurd this executive order is," said Evan Greer, deputy director of Fight for the Future, in a tweet. "In the name of defending free speech it would allow mass government censorship of online content. In practice, it means whichever party is in power can decide what speech is allowed on the internet."Action alert: [The] leaked documents ... give these bureaucratic government agencies unprecedented control over how Internet platforms ... whichever political party is in power could dictate what speech is allowed on the Internet. If the government doesn't like the way a private company is moderating content, they can shut their entire website down.

Public Knowledge's Lewis said "Political bias by digital platforms remains unproven. In fact, an independent study by The Economist points towards search platforms having a bias towards virality and attention, not political ideology," said Lewis. "This matches reports from books like Tim Wu's "The Attention Merchants" and others that study social media addiction. It is this sort of algorithmic bias towards virality that foreign adversaries use to sow disinformation and mistrust in our country."


NPR: A new legislative proposal by Sen. Josh Hawley, R-Mo., would ban elements of social media he views as addictive ... (in) social media apps like Instagram, Facebook and YouTube. Concerns with technological addiction are merging with rising political anger against Big Tech. Texas Republican Sen. Ted Cruz, a champion of free markets, seems at least open to it. "Nobody wants to see a federal speech police. But at the same time allowing a handful of Silicon Valley billionaires to be the censors of all political speech in America is a terrible outcome. And so I think Sen. Hawley's bill is a positive step in the right direction," Cruz said.