Conservatives are trying to not just influence academic speech, but also turn public schools and colleges into right-wing political indoctrination centers. And they're not being subtle about it either, especially after putting Scott Walker in charge of Young America's Foundation: 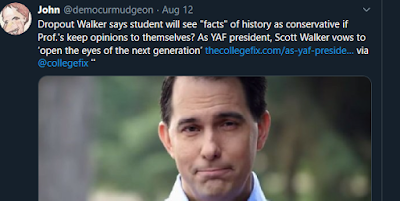 There is no attempt to cover up YAF's prime objective; to redefine and paint "socialism" as the villain again. So why isn't this Townhall article the lead topic the UW's Board of Regents latest discussions?

Gerrymandering districts and turning our judicial branch into conservative judge legislators for right-wing politics wasn't enough. Now they're going after the public education system, the last remaining area of infiltration, pitting students and their parents against other students and parents, the old divide and conquer agenda Walker perfected.

The fact that this whole issue is a totally manufactured solution to a non-existent problem seems to have gotten lost along the way:


As the 2019-2020 school year begins this fall ... students will be heading into an academic environment rife with politicization and heated classroom discussions. But, how do students truly feel about issues such as socialism, free speech, health care, and illegal immigration? (Does) Gen Z feel comfortable sharing their true opinions? Do they even know the basic concepts of what they are discussing?

Remember when Republicans questioned whether naive liberal-leaning students should even be allowed to vote? Well, if Young America's Foundation can convert students into naive right-wingers, that could change.


To find out, Young America's Foundation, "the nation’s premier organization for inspiring students on high school and college campuses with conservative ideas," teamed up with Echelon Insights for a poll given exclusively to Townhall to gain a better understanding of America's youth.

Notice YAF's poll actually proves how ridiculous and phony this whole subject is. They're actually arguing against simple human nature. When it comes to free speech in the classroom:


1. Students generally believe their teachers are receptive of open debate: 74 percent of Gen Z'ers say they "feel like my teachers generally encourage students of a variety of points of view to participate in class discussions about government and economics."

YAF then deceptively drills down into the smaller percentages by making them seem larger than they are:


2. However, 46 percent admit they "have stopped myself from sharing my ideas or opinions in class discussions." As for why these students refrained, it appears that peer pressure is the dominating factor as 50 percent said they held back their opinions because they "thought my classmates would judge me."

Human nature...not intimidation, that's what's behind this manufactured speech crisis. YAF's war on human nature continues to get their spin:

This is where YAF and Scott Walker come in, by repeatedly redefining socialism as the villain in their twisted vision of what that would mean:


YAF spokesperson Spencer Brown told Townhall that this poll highlights why his organization is so necessary for high school and college campuses ... groups like YAF are needed to fill in educational gaps and truly explain conservative ideas and values. Brown said. "Today’s students are hungry for ideas and keyed into the issues of the day but are frequently denied venues for free and open dialogue.”

No, it's just peer pressure and being unsure about ideas they're still trying to work out:


The poll also shows that very few friends discuss free market concepts with their peers. However ... they do discuss and learn more about issues like economic inequality.

The poll found that the more informed somebody was on socialism, the less likely it was they thought it would benefit the country ... on a scale of 1-10, do you think some form of socialism would be good or bad for the United States? At first, the initial average mean response was 4.18. When given more information, that average mean decreased to 3.84.

Repeating again, this is a manufactured crisis:


Brown said, "America’s educational institutions are failing to provide the next generation with venues where the free and open exchange of ideas can flourish. "This is where bold Young Americans for Freedom's iconic campus activism projects and host leading conservatives through YAF’s campus lecture program are filling a significant gap in education."