When asked if he was concerned that many people saw that tweet as racist and that white nationalist groups were finding common cause with the statement, Trump said Monday he wasn’t because “many people agree with me.”

“[They’re] complaining all the time, very simply, you can leave right now,” added Trump. “Come back if you want, don’t come back, it’s OK too. But if you’re not happy, you can leave.”

I wrote a blog post yesterday about a Trump appeaser who doesn't see him as a threat, and it appears I may have understated my point, and that's not a good thing. The one word I should have included over and over? Fascism. See if anything in the chart reminds you of a common Trump theme: 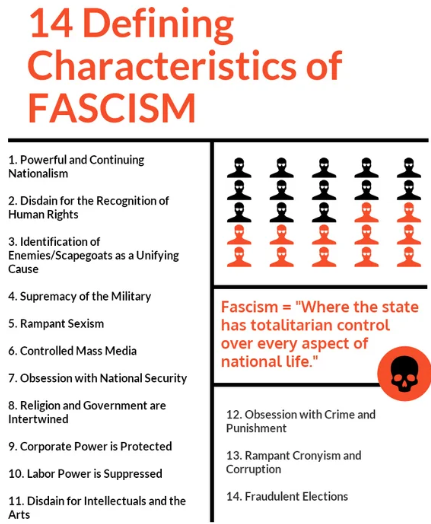 In my blog post yesterday I wrote...Rick Esenberg, the founder of the Wisconsin Institute for Law and Liberty, a conservative-libertarian law firm ... became a willing partner in the Trumpian cultist movement to take down traitorous liberals. For instance, Esenberg's comments in the recent Isthmus ... saying (Trump's) "not a threat to the constitutional order". Seriously?

1. “I don’t think Donald Trump is that serious about a lot of the things that he says ... And so, he tweets a lot of stupid classless and vulgar things, but it doesn’t really translate to any kind of action.”

Welcome to Trump Fascism: Trump's latest tweet storm posted this morning is probably the most incendiary call to action yet; the total vilification and proposed elimination of America's true enemies; everyone not a Trump cultists: 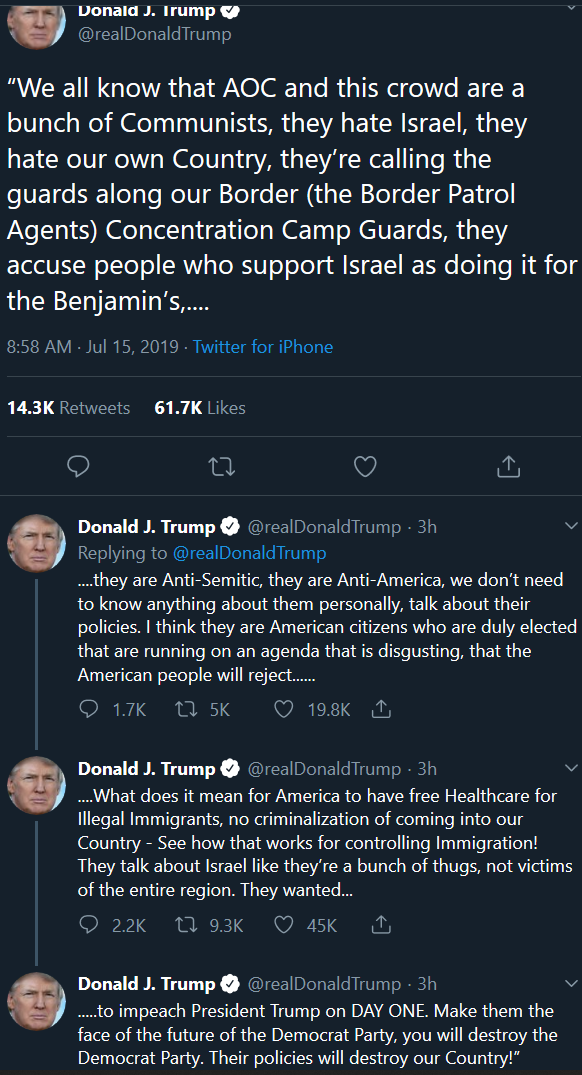 Heck, parade floats were onto this guy... 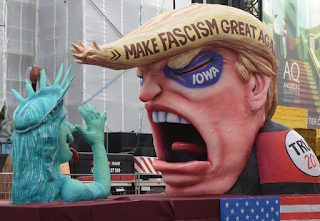 Fascist America is here: Explaining fascism is not easy, but the following contemporized look at Trump's reckless version of fascism shows us how real and threatening it is. From Vox, these are the articles main points made by Jason Stanley:

The targets are leftists, minorities, labor unions, and anyone or any institution that isn’t glorified in the fascist narrative. We’re not on the brink of some fascist takeover. But there are reasons to be concerned, and we should always be on guard — that’s the lesson of history.

Fascist politics would focus on the dominant cultural group. The goal is to make them feel like victims, to make them feel like they’ve lost something and that the thing they’ve lost has been taken from them by a specific enemy, usually some minority out-group This is why fascism flourishes in moments of great anxiety, because you can connect that anxiety with fake loss.

The story is typically that a once-great society has been destroyed by liberalism or feminism or cultural Marxism or whatever, and you make the dominant group feel angry and resentful about the loss of their status and power. Almost every manifestation of fascism mirrors this general narrative.

Truth is required to act freely. Freedom requires knowledge, you need to know what the world is and know what you’re doing. So, freedom requires truth, and so to smash freedom you must smash truth.

Philosopher Hannah Arendt … she says that fascists are never content to merely lie; they must transform their lie into a new reality, and they must persuade people to believe in the unreality they’ve created. And if you get people to do that, you can convince them to do anything.

Part of what fascist politics does is get people to disassociate from reality. You get them to sign on to this fantasy version of reality, usually a nationalist narrative about the decline of the country and the need for a strong leader to return it to greatness, and from then on their anchor isn’t the world around them — it’s the leader.

The thing is, people willingly adopt the mythical past. Fascists are always telling a story about a glorious past that’s been lost, and they tap into this nostalgia. So when you fight back against fascism, you’ve got one hand tied behind your back, because the truth is messy and complex and the mythical story is always clear and compelling and entertaining. It’s hard to undercut that with facts.

My son provided me with the video below that didn't just explain fascism, but ANTIFA, the supposed freedom of expression movement on college campuses, and more: