Simply put, Esenberg is a legal conservative elitist who's inflated image of himself is due mostly to his impressive record in profoundly conservative courts. Nice. He'll remind you that he is the founder and wizard behind the curtain of the Wisconsin Institute for Law and Liberty, a conservative-libertarian law firm that became a willing partner in the Trumpian cultist movement to take down traitorous liberals. Come on, Trump's no threat:

I had to laugh at Esenberg's comments in the recent Isthmus, where he unsuccessfully tried to cast a magically crafted spell in defense of Trump, saying he's "not a threat to the constitutional order". Seriously?

1. “I don’t think Donald Trump is that serious about a lot of the things that he says ... And so, he tweets a lot of stupid classless and vulgar things, but it doesn’t really translate to any kind of action.”

Sure, nothing to worry about with thinking like this...

Or like the time today Trump told "Progressive Congresswomen" to go back to the countries they came from...yup he really said that: 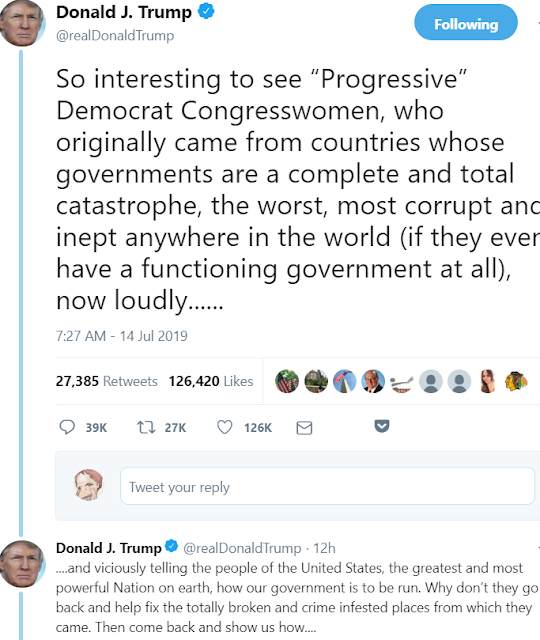 
2. He dismisses graver existential assessments ... “I think there’s a lot of exaggeration that goes on. What Trump is and what he does — I don’t think that he is a threat to the constitutional order.”

Like the Trump's claim about dirty and diseased immigrants? No threat to anyone Rick?

None of this is a secret to anyone but Esenberg:


1. Sykes says “the nativism, the phobia, the attitude towards women, the character issues involving deception, his isolationism, his willingness to play the race card, his support for protectionism,” set him squarely against Trump from the start. Someday Trump will leave office. But this alternative reality universe and hyper tribalization of politics — that’s not going to disappear when he disappears from the stage. This is a period of real turmoil, and I worry about that.”

2. Ed Wall wrote a tell-all book critical of Walker and ... sees Walker’s leadership as a model for how Trump has governed. “It went from a representative government, where they had to talk and they had to negotiate things, to more of a dictatorship. That bothered me as a taxpayer and a voter,” says Wall, who characterized the prevailing sentiment as being, “We won and we’re going to shove everything down your throat.”

3. Under Trump, that impulse has grown, Wall says. “Look at Vos and Fitzgerald” — Assembly Speaker Robin Vos and state Senate Majority Leader Scott Fitzgerald. “They feel empowered by an electorate that sees something in Donald Trump.”Wall says: “This is essentially the Republican Party saying, ‘We don’t accept the last election.’ They are acting as if they’re governing now. They’re tightening control.”