The end of public education is quickly unfolding.

It's true the lengthy period of school closings, unavoidable during a pandemic, frustrated and angered some parents. And like flies to sh*t, Republicans sniffed out that anger and decided to exploit it, by dividing local communities and dismantling public schools.

Excuse: Parents Know What's Best when it comes to their Child's Education: The days when parents voted for the best candidate for school board is coming to an end. It is now devolved into mob rule and tantrums by juvenile parents, not to mention billionaire money supporting politically motivated candidates for private education. And it's spreading:

The National Parents Union, a parents’ rights group that often opposes teachers’ unions, laid out a vision of the nation’s political future — and a stark warning.

“This is only the beginning of the parent revolution,” said Keri Rodrigues, co-founder and president of the group. “Politicians will have to make a choice: Either work with parents and families on reimagining education, listen to their concerns [and] govern in their best interests ... or get voted out of office.”

In other words, state legislators will decide what schools teach based on the level of anger a minority of parents display over certain subject's...like the mythical teaching of CRT.
Vos-Republicans not only pushed banning non-existent teaching of CRT in schools, but they also decided to ban words and phrases to coverup the countries racial history. Breathtaking:

If the bill became law, it would ban teachers from including words like “structural bias,” “systemic racism,” “multiculturalism,” “social justice,” and “patriarchy” in their lessons. The bill also disallows teaching about the concept of “white supremacy” — despite ongoing racial oppression in the United States, and the fact that the country was built on slavery and genocide. 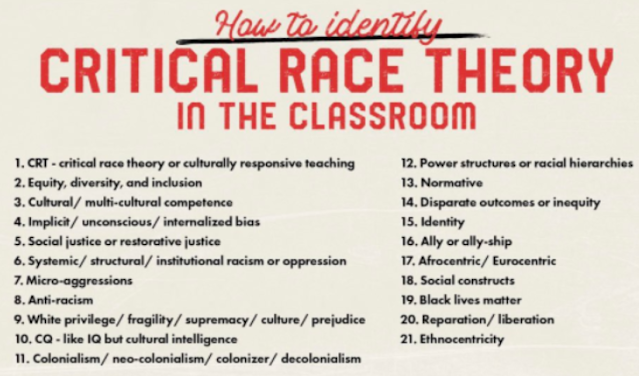 Oh, and I think this is a pretty clear statement: "STATE TO DEVELOPE CURRICULUM MODEL: