A lot has been said about QAnon conspiracy theory GOP legislators and candidates sprouting up all over the country.
Even though the focus has been more about Trump's "enemies," we can't ignore all of the Republican controlled legislatures adopting these same QAnon tactics to smear state Democrats. Like one QAnon candidate said:

“A conspiracy theory only sounds crazy until it’s proven.”

And up until now, "Projection" has always been the underlying ploy of the Republican Party.
But thanks to Trump, now all you have to do is fabricate something, then question the fabrication, to get believers to...believe.

"Expressed Uncertainty" and "Open Questions" new GOP Trick: Which brings me to the next and most obvious tactic. I recently discovered this revealing research about spreading "uncertainty" with planted "open questions" meant to manufacture conspiracies..and it's working.  Here's the source and tweet: 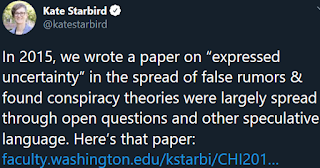 Example: Republicans Scott Fitzgerald and Robin Vos are using "open questions" in lieu of finding any actual fault with Gov. Evers. Here's their most blatant attempt to date:

The staffer who secretly recorded a phone call last month between Democratic Gov. Tony Evers and GOP leaders may have committed a felony if nobody on the call authorized the recording.

Want to know how flimsy this whole "felony" outrage is? The standard is extremely low:

It is not unlawful for a person who is a party to the communication to record or authorize another person to record the conversation without the knowledge or consent of the other parties,”

That's it. Struggling to trash Gov. Evers, they've made up this "open question:"

Fitzgerald said , “The governor should be in control of his office — the buck stops with him. So if one of his staff committed a felony, he needs to hold that person accountable.”

“The governor needs to immediately make clear who from his office created the recording, who authorized it, and what disciplinary actions his staff is facing,” Fitzgerald said. “After bipartisan condemnation of these actions, he also needs to assure legislators that no more recordings exist between our members and the governor or his staff.”