One of my biggest frustrations listening to Democrats talk about Medicare-for-All, is that they're not getting to the bottom line; how do you pay for it? At least give us some idea so Americans have time to let it settle in. It should be a priority. Vox: 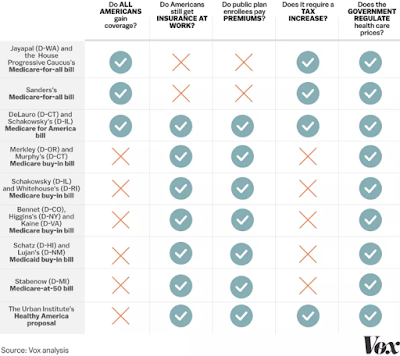 Sanders’s office has released a list of financing options that generally impose higher taxes on the wealthiest Americans, such as increased income and estate taxes, establishing a new wealth tax on the top 0.1 percent, and imposing new fees on large banks.

Medicare for America (DeLauro and Schakowsky): The Republican tax cuts would be rolled back. An additional 5 percent tax on income over $500,000 would be applied. Payroll taxes for Medicare would also be hiked, as would the net investment income tax rate. New excise taxes on tobacco, alcohol and sugary drinks would be introduced. The bill also requires states to continue making payments to the federal government equivalent to what they pay right now for Medicaid’s costs.

We already know how much Bernie Sanders' plan cost, as explained below. Note: It should be mentioned often that Medicare-for-All will cover everyone who is now uninsured. The number of uninsured, by the way, is increasing thanks to Trump, as explained by Steve Rattner on NBC:

And people want it...

Thanks to a study by the Mercatus Center, a libertarian-leaning think tank, we know how much Medicare-for-All is going to cost and save money at the same time. Again, every American will have health care, keep their own doctors, and save businesses the cost of providing insurance in the workplace, putting them on an even playing field with other industrialized trading partners:


A study estimating that a universal health-care plan by Sen. Bernie Sanders would cost the federal government $33 trillion by 2031, arguing that it proves Democrats have moved too far left. Sanders, looking at the same study, says it shows his “Medicare for All” proposal would save Americans $2 trillion. What’s going on here?

Republican Plan not so Popular: The crowd at a town meeting with Republican Sen. Chuck Grassley didn't go as well. He couldn't answer why he voted to kill the ACA so many time, yet still claim to want to keep coverage for preexisting conditions, which is part of the ACA and would be repealed. The crowd wouldn't let him off the hook. He so deserved it: