Vos vilifies "turning out minorities," and "imagines" Koch's not appealing to white voters, because "that would be crazy" right?

So, just to be clear, Vos-Republicans aren't drawing any conclusions about possible election fraud, BUT they are comparing it to a "murder probe?"

AP: Wisconsin Republican Assembly Speaker Robin Vos on Tuesday defended not releasing
documents related to an ongoing investigation he ordered into the 2020 election, saying putting them out now would be like police revealing details of a murder probe.

The Vos-Republican focus is on the nonprofit Center for Tech and Civic Life, who granted money to helped run local elections, something tightwad WI Republicans intentionally did not want to do. Mark Zuckerberg's donation foiled their plan.
Vos loves Trump's New Plan: Instead of the big lie... 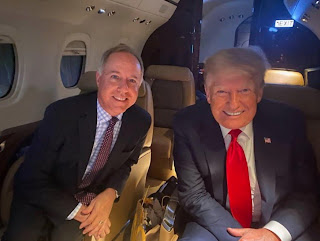 Salon: Trumpist writer Mollie Hemingway, a frequent voice on Fox News, clearly feels she's found a more sophisticated justification for the baseless accusations that the 2020 election was "rigged." She's even tied the conspiracy theory to Facebook CEO Mark Zuckerberg, cleverly wielding his well-known status as a villain to push this nonsense about a "rigged" election.

Hemingway rolled out her cleaned-up version in her new book, "Rigged: How the Media, Big Tech, and the Democrats Seized Our Elections." In it, she cleverly ... rewrites the Big Lie to focus on money that Zuckerberg gave — which she derides as "Zuck Bucks" — to a couple of voting rights groups, money that was spent on making it easier for marginalized people to vote.

By her own admission, all the group did was reach out to voters to make sure they turned their ballots in on time, assist voters who needed to make sure their ballots were filled out correctly, work to reduce the lines at ballot boxes, and help voters figure out the mail-in ballot system. This basic pro-democracy work done by these groups is morphed, in Hemingway's telling, into "tech oligarchs' buying the administration of the state's elections" and even the "privatizing" of elections. It's a fancy update on a very old right-wing talking point that paints any activist effort to assist voters — like offering rides to the polls, distributing food or water to voters waiting in line, or organizing "souls to the polls" events through churches — as somehow malevolent.

Former conservative activist State Supreme Court Justice Michael Gableman came right out and said what he was asked to do in his "fraudit" by Trump toady Vos:
WOW; Vos vilifies "turning out minorities," and "imagines" Koch's not appealing to white voters, because "that would be crazy" right? He really said this without the media pointing out the racism:

“Imagine if it happened in reverse, where the Koch brothers gave millions of dollars to only turn out people of white background in the suburbs. People would say, ‘That is crazy.’ Well, that’s exactly what happened with the money from Zuckerberg in reverse, where they focused only on turning out minorities in large cities.”

1. Vos blatantly vilifies "turning out minorities." No hidden meanings here.
2. It's like "the Koch Brothers gave millions of dollars to only turn out people of white background...:" You mean, like this from Jane Mayer, and others... 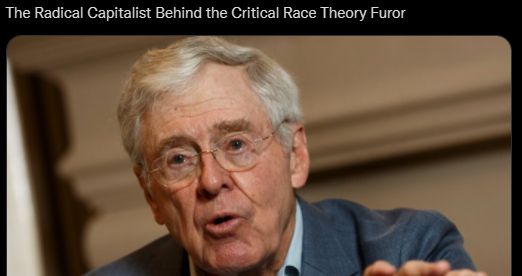 The Nation: The overwhelmingly white Republican base is rewarded with a story that is easier for them to accept than the true one—a story where they are both the heroes of American history and the true victims of the American present, oppressed by “political correctness.”

As UnKoch My Campus wrote in our expansive report, “Advancing White Supremacy,” the Koch network has purposefully exploited this relationship for years. The network has long-standing ties to white nationalist scholars and has used their research to drive policies that serve its economic goals at the expense of people of color, including efforts to resegregate our nation’s schools, dismantle voting rights, and expand the prison-industrial complex.

...A very "people of white background" agenda, wouldn't you say? Then there's this...

"Turning out Minorities in large cities..." the Horror:  On WPT, Here and Now (Oct 15, 2021) focused on that funding donation, and how other conservative areas received similar funding donations. Exact totals were not released yet, but they are based on population (click image to enlarge):

Back to the Koch funded "grassroots" protests against critical race theory and mask mandates.
Republicans Defend Threats Against Public Servants: Republicans are now against having U.S. AG Merrick Garland investigate serious threats nationwide against school board members, city leaders, state public health officials, etc. Republican wacko Rep. Jim Jordan was outraged Garland would simply take the word of the National School Board Association about the uncivil meetings and threats. Yea, who are they?

Citing a spike in harassment, intimidation, and threats of violence against public school officials, AG Garland said he has directed the FBI to meet with local officials to coordinate a response.

Here's a glaring hypocritical moment about reporting threats. In Wisconsin, Vos-Republicans wrote a bill that gave the public this amazing power against anyone teaching racial history:

The proposal also gives parents or guardians the power to bring a legal challenge against a school district or private school operator that violates the law and requires school boards to post online all curricula used in the school district.

And yet, in the same universe, Republicans are against any such accountability:

Garland announced the memo earlier this month, directing FBI officials and federal prosecutors around the country to meet with local counterparts to discuss potentially criminal threats against school officials and teachers and to establish "dedicated lines of communication for threat reporting." Rep. Jim Jordan (R-Ohio) called it a "snitch line on parents" who criticize school board initiatives regarding issues like the teaching of critical race theory.