Deep down we always knew Scott Walker cared only about loyalists to his authoritarian rule. Now, if you disagree with Walker, you will be blamed for America being "under siege:"

Walker, as president of Young America's Foundation (YAF), is now going after what his party has angrily called naïve liberal students. Figuring they're still impressionable and "young," Walker thinks his brand of extreme propaganda could radicalize America's youth. In fact, if you're not conservative at a college level, you're "lost:"

Walker has enlisted Christians too...uh, not that everyone is a Christian: 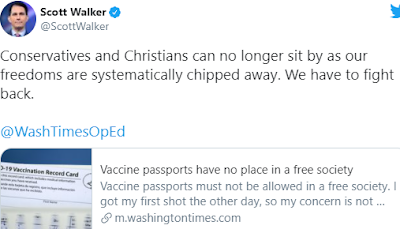 Walker's all-or-nothing attack has been going on in Wisconsin for over 10 years, thanks to Walker's leadership as governor and his gerrymandered band of plundering Republican pirates in the legislature.
But under Walker, his tax cut driven austerity came at a huge cost. VOX:

Here's what happened to democracy in Wisconsin. Surprise, it's not all "freedom and liberty:"

The conclusions were clear: The GOP is the problem. “Results suggest a minimal role for all factors except Republican control of state government, which dramatically reduces states’ democratic performance during this period,” he writes. While many researchers have attempted to quantify the health of democracy in different countries around the world, Grumbach’s paper is the first effort to develop some kind of ranking system for US states. And it’s yet another piece of evidence that the Republican Party has become an anti-democratic political faction.

But one of the biggest abuses hasn't been figured into this research yet:

One of the worst abuses by NC's Republican legislature — stripping Democratic Gov. Roy Cooper of key powers after his 2016 victory — doesn’t factor into the state’s score, as Grumbach hasn’t decided on a satisfactory way to quantify it. A similar maneuver performed by the Wisconsin state legislature after Democratic Gov. Tony Evers’s victory in 2018 also doesn’t count against the state’s already dismal SDI score.)

Voter Suppression is Real, but not for Republicans: Scott Walker can't resist this bizarre "Colorado is worse than Georgia" fantasy:

Georgia’s law, for example, is more worrying than even voter ID laws. It gives Republicans more direct control over election administration, allowing them to bend the rules in their favor: enforcing strict standards for ballot disqualification in Democratic-leaning precincts and lax ones in Republican-leaning ones, for example.

But left out are a few HUGE facts Facebook QAnon'ers always leave out, or most likely just don't know about:
New Tourism moto... 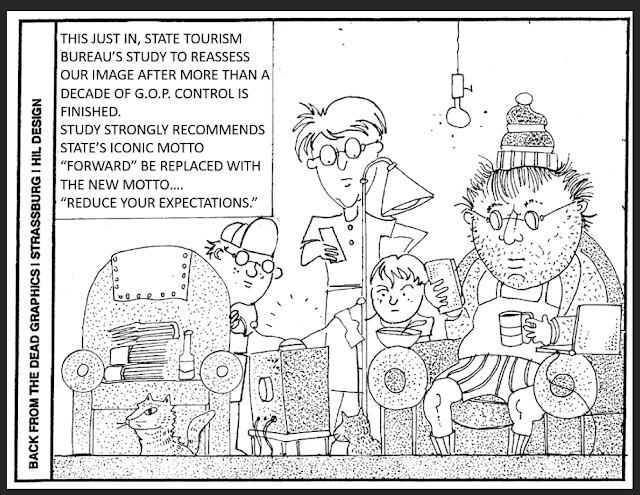