It's another Robin Vos temper tantrum, thinking he can get away with punishing voters for not electing a "Republican" State Superintendent, to what is supposed to be a nonpartisan office:

Vos just "canceled" DPI funding. Will this ass-wipe ever grow up?
The big lie, that teachers are controlled and owned by union bosses, "cancels" out the hard work and dedication of every teacher. Didn't this get old during the Act 10 protests?
Yet Vos led the charge to get kids back into those dangerously confined liberal indoctrination centers, also known as classrooms, with those same teachers...especially during a global pandemic he never took seriously. I'm now thinking that was meant as a punishment for teachers.

Still ridiculously authoritarian, Vos spewed what should be a career ending diatribe that may have made a few parents angry:

"... the teachers union owns the DPI; not the parents or the students or the taxpayers. Count me as someone who isn't going to support putting another nickel into this unaccountable state bureaucracy," Vos tweeted on Tuesday, an hour after the Associated Press called the race for Underly over former Brown Deer School District Superintendent Deb Kerr.

Not surprisingly, the public stated again they didn't want private schools. Profiteering privateers are okay, but unions aren't - even after losing almost all their negotiating power due to Act 10? Yup:

Kerr was largely backed by conservative groups who support the expansion of private school vouchers and Wisconsin Republicans. American Federation for Children, a pro-voucher group founded by former Education Secretary Betsy DeVos that generally backs Republicans, spent $209,000 in the race on behalf of Kerr.

Yet voters statewide made their intentions clear when they elected Evers:

Evers was elected governor on a platform of increasing funding for schools and following polling that showed broad support for more spending on schools.

Here are a few interesting tweets: 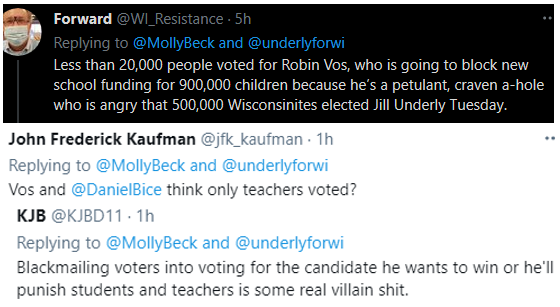