Wisconsin Republicans say, it's NOT about you? PPP loans just to help Business? Yup.

Vos Republicans don't believe there's a legitimate opposition party with strongly held policies and beliefs. They think liberals, progressives, and Democrats are communists and Marxists, trying to destroy their own jobs, families, economy, and government. I get it, but it doesn't have to make sense to our QAnon neighbors anymore.

Stimulus Downside for Republicans? PPP Loans forced Business to Keep Employees? Really, employers were "caught between a rock and the hard place" keeping employees? Gerrymandering made this brutal but free from voter accountability comment possible. Behold...

JSOnline: Republican Sen. Joan Ballweg of Markesan, who as a member of the Legislature's Joint Finance Committee voted in favor of the state tax cut (for PPP loans) on Wednesday.

She said the program helped the tourism industry get through the pandemic but was flawed because of the rules requiring it to retain employees when business was down.

"They were caught between a rock and the hard place because their business crashed. But by trying to get into the PPP loan, they were mandated to keep on employees that they didn’t need. From the beginning, it was a noble effort. Was it done perfectly? By far and away not."

Do antigovernment Republicans act like they want "small" Government: Think about it; they run for a government job, then get paid with hard earned taxpayer dollars, do nothing to solve state-wide problems, then create gerrymandered safe districts to keep their cushy government jobs, all the while grabbing power away from localities and the Governor.
To coverup their lack of any kind of agenda, freeloading Vos Republicans are focused on accumulating power to stop progress that should INVEST taxpayer dollars in future upgrades.
1. POWER!!! Vos Republican wrote this legislative power-grab opposed by Gov. Evers:

Give the Legislature oversight of the distribution of federal funds that are allocated to Wisconsin related to combating COVID-19...give Republicans in the Legislature authority over how to spend all future federal COVID-19 dollars that the state receives.

Heads up Governor Evers, Michigan Republicans are showing us why that's a bad idea...

Vos Republicans have control over just 10 percent of the federal COVID relief aid, so guess what they're doing? They're already using it to punish districts that canceled in-person classes because of the pandemic. COVID-19 remember is just a hoax, but wear the mask if you like...:

The budget committee approved a spending plan that will financially penalize some school districts for offering online instruction during the pandemic. Republicans praised the plan for rewarding school districts that have “done the right thing.”

…threatening some school districts too...

(The superintendents wrote back saying,) "Moving too quickly to in-person learning carries its own problems."

A few years back, Sen. Steve Nass accused districts of tricking referendum voters by making claims schools needed maintenance upgrades and building replacements, when they didn't need it. That never was true, not for West Allis or Wauwatosa:

The district operates buildings that are more than 70 years old. "We have and will continue to do everything we can to make our buildings safer during this time and that includes maximizing ventilation and air exchange rates. However, this is not easy in our older buildings," they wrote.

Do-nothing Vos Republicans, skipping the hard work spelled out by the CDC, just want to open schools without making them safer...: 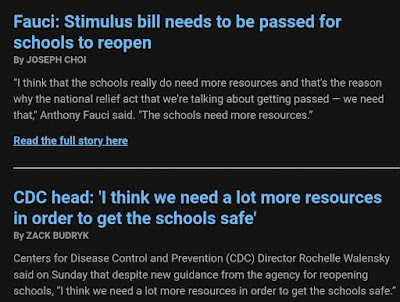 Because Republicans want to kill any possibility of mask mandates statewide, the superintendents pointed out why that's another bad idea:

Schools can operate more safely when community spread is seriously addressed. Help us with this," Lexmond and Ertl wrote.

Losing $1.3 Million Federal Funding for Allowing One Week Waiting Period to Resume: It wasn't so long ago Republicans threw away $25 Million...

Well, their baaaaackkkkk...throwing away more of our own federal tax money:

Gov. Tony Evers vetoed a package approved by the GOP-led Assembly and Senate (over) controversial items added by the Assembly. In order to receive the federal relief, states cannot have a waiting period for people filing a claim for unemployment benefits: