Rush Limbaugh was not an admired public figure the last time I looked. He did bring about an open homophobic and racist "normal" for conservatives to embrace under the guise of "free speech."

And who can forget, or try not to remember... 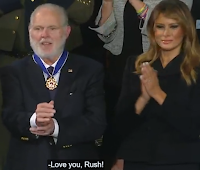 Assembly speaker and cosplay governor Robin Vos sent the following letter to the governor. A statewide lowering of flags to honor...Rush? Sure, why not shove this crackpots career down everyone's throat? As Eric Boehlert of Press Run said:

"Rush Limbaugh, the 70-year-old broadcaster, who once compared Covid-19 to the "common cold," died from lung cancer.

The AP described his decades of hate programming as a "merry brand of malice," and left out the part where he was the proud voice of racism, homophobia, sexism, xenophobia, and lots of other brands of denigration that he spread around the AM dial." 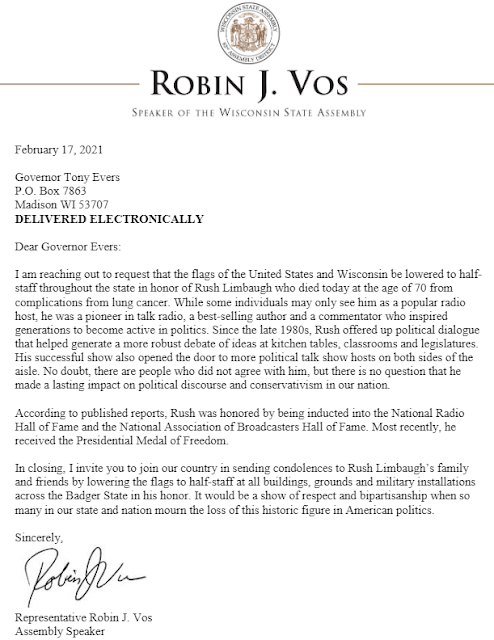 "A country club demagogue, he helped America’s right-wing normalize a distinct culture of bigotry and cruelty.
He steered the Republican Party towards no longer caring about policy and governance in any way, and instead focused on 'owning liberals,’ trolling Democrats, and purposefully lying. And the press cheered.

"I know I have become the intellectual engine of the conservative movement," Limbaugh told the New York Times, pretending his programming of mockery and loathing was akin to serious debate. Before birtherism there was Rush. Before InfoWars and QAnon, there was Rush, purposefully polluting American minds for profit.

Limbaugh clearly did emerge as the Voice of American Conservatism, a proud emblem of mockery, race-baiting, and prejudice. That culture was soon perfected by Trump, where any topic and issue was best debated by lying about everything, at all times. Limbaugh "leaves behind a conservative movement no longer interested in truth," noted former Republican Congressman Joe Walsh.

A straight line today exists between the birth of Limbaugh's right-wing career and the murderous mob that attacked the U.S. Capitol on January 6. As one Twitter user put it yesterday, "Limbaugh is, and always has been, a very Proud Boy."

The Beltway press for decades glorified his career, only occasionally acknowledging it took place entirely in the gutter. This week, the press is presenting him as a hugely popular, powerful, and oh yes, sometimes controversial host.

It needed to be transparent about the endless litany of lies and heartless smears Limbaugh gleefully trafficked in for decades, as he stuffed his pockets with millions and wallowed in the misfortune of others. 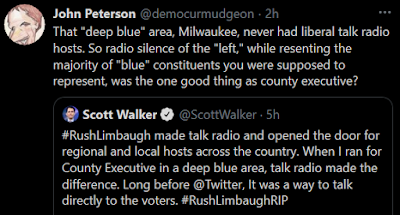