Trump using our own government to destroy the Postal Service and the right to vote...

Taking a little summer vacation is so difficult to do under Trump, and it's exhausting.

The idea the Republicans would ever actually take out the U.S. Postal Service, a constitutionally named service, to privatize and profit from was ridiculous...until Trump, who'll try anything.

Here's one of the most outrageous statements ever, but also a refreshingly open admission by Trump that he was using our own government to suppress voting in Democratic states.

Even this seemed surreal and so over the top that it completely blew my mind: 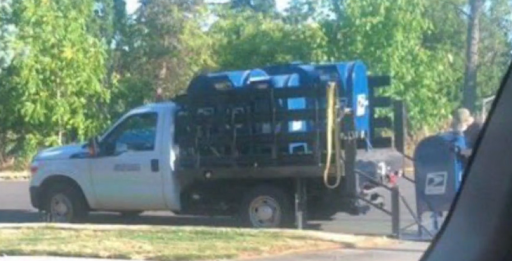 Conservative rural voters weren't always so willing to cut their own throats when it comes to mail delivery, their most reliable connection to the outside world, even after all the failed GOP promises to bring high speed broadband connections to their farms and communities.
From December 2014, rural folks blew a gasket when postal service tried to close down mail distribution centers, slowing service down to a crawl. Remember? (Check out all the following stories relating to this, included with this link)

After continuing to lose billions of dollars in fiscal 2013, the U.S. Postal Service will move forward with plans to close four processing centers in Wisconsin in 2015. The centers to be shuttered are in Madison, La Crosse, Eau Claire and the Wausau area.

Funny, I remember back in 2009 when Republican Representatives James Sensenbrenner and Paul Ryan bravely came to the rescue from a problem they actually created, after rural communities and farmers bitterly complained about distribution center closings and the resulting delays of their business mail; products, payments and shipping.

Milwaukee Journal: As the U.S. Postal Service searches for $2 billion in spending cuts, residents in several Wisconsin communities are objecting to changes at their post offices. Consolidation of mail carriers in Oconomowoc, West Bend, Oak Creek and elsewhere has stirred complaints that mail is being delivered late and that residents feel neglected. In Waukesha, business owners fear that cutbacks in mail collection hours will undermine their ability to conduct business.

Some have found a sympathetic ear in an influential place: their (Republican) congressman. U.S. Reps. Jim Sensenbrenner and Paul Ryan both have intervened successfully on behalf of constituents who were unhappy with planned belt-tightening measures at their post office. In both cases, the Postal Service shelved its plans and re-examined its cost-cutting strategies.

Sensenbrenner ... found the cuts being imposed in southeastern Wisconsin to be too disruptive to customers. "You've got to remind the Postal Service repeatedly that their last name is service," he said.

Republicans of course caused all of this to happen, eventually giving us Trump's final assault on the post office. Here's how it happened, from the late Ed Schultz:

Labels: US Postal Service
Email ThisBlogThis!Share to TwitterShare to FacebookShare to Pinterest