Republicans Crazy argument "You have an individual right to make your own medical decisions"...yea, for other people?

Sen. Alberta Darling and dozens of local sheriffs are refusing to protect the lives of Wisconsinites all across the state, based on a provably wrong and ridiculously dangerous anti-mask talking point. For example:

Darling: "...the masks are important but that should be up to the individuals and local communities to decide what they want to do.”
Sheriff Dennis Stuart said in a statement; "You have an individual right to make your own medical decisions. We as government officials shall not intrude. The Constitution can't be suspended, whether people get sick or not,"

False-"fact:" Anti-maskers are making their own medical decisions about other peoples health... 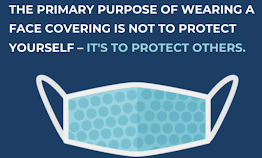 It's not just irresponsible losers making every place unsafe, it's a profound misinterpretation by law enforcements officials:

Washington County Sheriff Martin Schulteis said: "I believe citizens have the expectation that your sheriff’s office should expend resources providing a safe and secure community by investigating real criminal acts."

Would an angry unmasked person getting in your face or spitting on you a criminal act? Yes, and it's intentional. But the following is the prevailing thinking of too many sheriffs deciding on what they will and won't enforce. Still don't think law enforcement needs reform?

Never Pro-Life but shockingly Pro-Death: With the mounting infection rate and climbing death toll, we're faced with the reality that no matter how bad it gets, Republicans will not change their rock solid position. This is a version of the Gilded Age, where worker deaths and lack of safety were the price of doing business and making massive profits.
If someone could provide the names of Rep. Rob Brooks restaurants and businesses, it would be public service to warn people that Brooks is not requiring his workers to wear masks, which would say a lot about his concern about your health and possible transmission of a deadly disease:

Rep. Rob Brooks, R-Saukville, said he would not require employees or patrons of his two restaurants in Saukville to wear masks despite the order requiring them inside restaurants unless patrons are eating and drinking. "We understand that this is a controversial matter for some and we certainly understand and respect your decision to not dine in or visit us at this time," he said in a Facebook post. "We will respect your decision — please respect ours."

Yup, Facts, Charts, and Rates reported are just not believable or complete. It would be reckless to follow safety efforts? Unless each community is gated, it would be kind of hard to argue that each part of the state is different, the same BS Republicans have used to do nothing about national health care:

"To impose a statewide mask order based on incomplete data and game playing is reckless and negligent," Republican Rep. Jim Ott of Mequon said in a statement.

“The governor’s one-size-fits-all approach treats Milwaukee and Madison the same as Wautoma and Arpin. That's a misguided and heavy-handed approach that I simply don’t support," GOP Sen. Patrick Testin of Stevens Point said in a statement.

Let's look at the lunacy that Evers is wrong when he "...treats Milwaukee and Madison the same as Wautoma and Arpin. That's a misguided and heavy-handed approach..." Testin's politics of division and resentment between rural and urban people has been exposed. Poking her head out of the Trump rabbit hole, here's White House coronavirus task force coordinator Deborah Birx:
GOP voters say Evers hates Trump, liberals attacking "freedom:" Here are just a few examples that are deeply troubling from the cultists section of society:

Bonnie Johnson and her husband, Wayne, said, "I'm 79, you know, I don't like to be ordered around. We live in the United States and we're not used to being ordered around. I think people are going to get sick from wearing the masks. I think it's all political. I would like to see Scott Walker back in office. I think he would be handling this much better."

Her husband agreed. "It's an abuse of power by the governor. The masks are absolutely useless in protecting me. It protects others from me, but I'm not sick."

Scary communism, "all these mandates" (a simple mask mandate), and me, me, me…

Judy Panyk, a 68-year-old from Mount Pleasant, said wearing one on the bus makes sense. However, she said, "All these mandates" were making the country "more like a communist country. I'm not concerned at all about getting the virus because I don't like crowds or being around a lot of people."

Anti-maskers will Keep Wisconsin Businesses Closed and Hurting: Remember, these people are  "supply siders" and are oblivious to the consumer side of the equation (70 percent). Without demand and consumer confidence that it's safe to go out again, nothing in Wisconsin is going to change for the better:

Tosha Womack, 47, of Menomonee Falls, said she supports having to wear a mask. "I'm in support of the masks if it's going to make the virus dissipate," she said. "I'm tired of being locked up, I want to go out."

For fun, I had to include this. What a place to get a quote for the story. Only in Wisconsin:

Some businesses have already started to have such problems with customers not complying with the mandate. Nutz Deep II, a bar and grill in Marshfield, said some customers have been refusing to wear masks while waiting for a table.