Scott Walker's once pure political style of governing is now standard operating procedure in the GOP legislature. And their go-to think tank, the Wisconsin Institute for Law and Liberty (WILL), is now their legal arm designed to use the courts as a way to legislate "from the bench."

The Constitution, as WILL imagines it, demands Parental Rights as a cure for Gender Dysphoria: WILL is suing "the Madison Metropolitan School District over its guidance for staff on how to handle transgender or gender-questioning students." WILL wants schools to make teachers and administrators expose gender-questioning students to disconnected parents. They say it's a constitutional right of parents:

The parental rights the U.S. Supreme Court previously recognized are of this type: there’s no specific clause that specifies that parents are entitled to direct the upbringing of their children, but the Court has (correctly) recognized such a right as an inherent feature of liberty.

It's also not surprising conservative constitutional literalists magically knew that "liberty" inherently applied to parental rights. WILL glosses over any parental responsibility at home of course.

“By the time Plaintiffs learn the truth, the District may have already enabled their child to transition socially to a different gender identity without their consent, and that transition may become self-reinforcing, reducing the chances that their child will resolve the dysphoria in favor of his or her biological sex, as the vast majority of children do.”

It's true the vast majority do resolve their gender dysphoria, still...

According to prospective studies, the majority of children diagnosed with gender dysphoria cease to desire to be the other sex by puberty, with most growing up to identify as gay, lesbian, or bisexual, with or without therapeutic intervention. If the dysphoria persists into puberty, it is very likely permanent.

Yes, there's a definite dominionist religious element at the center of WILL's argument. Where could something like that go wrong? Conversion therapy?

“As a direct result of their religious beliefs, if these Plaintiffs’ children ever experience gender dysphoria, they would not immediately ‘affirm’ whatever beliefs their children might have about their gender, but would instead remind them that they were ‘fearfully and wonderfully made,’ see Psalm 139:14, and seek to help them identify and address the underlying causes of the dysphoria and learn to accept and embrace their God-given sex,” the complaint states.

...and I love this "guarantee," as if anyone has that kind of policy control:

“At the same time, Plaintiffs will never stop loving their children, or love them any less, no matter what they believe about their gender.”

Getting public schools into the middle of gender identity politics is part of the Republican effort to feed into homophobia and bigotry. This has nothing to do with "parental rights."

Point #1; If you believe as strongly in parental rights as WILL is pretending, you'll love this idea. A Missouri Republican used parental rights to get 14 and 15-year-olds into the labor force without public schools permission. This really happened in March of 2011. It never passed:

State Sen. Jane Cunningham says her quest to change Missouri's child labor laws is driven by her belief that the current restrictions are "implying that government can make a better decision than a parent." Children age 14 and 15 must obtain signed permits from the school they attend. She also contends the state's current labor laws are "over the top'' and prevent parents from "teaching a work ethic to their children." "This act modifies the child labor laws. It eliminates the prohibition on employment of children under age 14. Restrictions on the number of hours and restrictions on when a child may work during the day are also removed. It also repeals the requirement that a child aged 14 or 15 obtain a work certificate or work permit in order to be employed. Children under 16 will also be allowed to work in any capacity in a motel, resort or hotel where sleeping accommodations are furnished. It also removes the authority of the director of the Division of Labor Standards to inspect employers who employ children and to require them to keep certain records for children they employ.

Point #2: 14-Year-Old workers in Texas too, with a union twist: We should be thankful the Walker administration didn't insist on going this far:


If the bill passes, children as young as 14 will be able to enter into an employment agreement with most employers without parental consent, but they will not be permitted to join a union without a signed parental consent.

Point #3: Parental Rights GONE thanks to Wisconsin Republicans, and WILL did nothing at the time, and still hasn't since it passed. Constitutional rights...?:


The GOP-controlled legislature has given final approval and sent to Republican Gov. Scott Walker a bill that would loosen child labor laws. Assembly Bill 25 removes the requirement for 16- and 17-year-olds to obtain permits signed by a parent or guardian in order to work. The measure was approved on a party line 20-12 vote. Democrats maintain the bill would allow children to make important life decisions that could adversely affect their educations — against their parents’ wishes.

In 2011, Walker signed into law a provision in the 2011-13 state budget which eliminated restrictions on 16- and 17-year-olds working more than 26 hours during a school week and more than 50 hours a week during vacations.

If no parent or guardian is available, a DWD officer can sign off for a child worker. These officers are funded by a $10 permit fee paid by the employer. A portion of the fee also goes to the state’s General Treasury. By eliminating this fee, Republicans are cutting funding for the enforcement of child labor laws and at a time when every penny counts, needlessly reducing state revenue.

WILL Lawsuit is against Gender Questioning Students, and not really about Parents, it's Political Transphobia: Wouldn't you know it, a high school junior and sophomore sound more like the adults in the room identifying the real intent of the lawsuit:


The Madison Memorial High School Gender Equity Association began to rally in support of the guidance after WILL’s initial complaint in the fall, said junior Maggie Di Sanza and sophomore Amira Pierotti, two of its leaders. They said the guidance serves as an essential way to protect students’ rights and help them through a period of time that can be challenging, even with parental support.

“It’s just incomprehensible to me that anyone would target these rights and do it with not a care about the students, about kids,” Amira said in an interview last month. “This (lawsuit) isn’t for the betterment of others, this is because you are scared that you don’t know what’s going on with your kids and that you’re afraid they’re trans or gender-expansive because you are transphobic.”

Their advocacy has included circulating a petition to other district schools and creating signage for buildings to reassure students they have staff’s support. Amira cited statistics showing non-binary and gender fluid students are more likely to be kicked out by their parents, report anxiety and consider self-harm. “It’s just a really frightening time right now,” she said, adding that showing “visible support” for those students is important when opposition like this is made public.

WILL is setting up for Constitutional Amendment: Winning this case is an important precursor to a proposed constitutional amendment. Who knew this was out there: 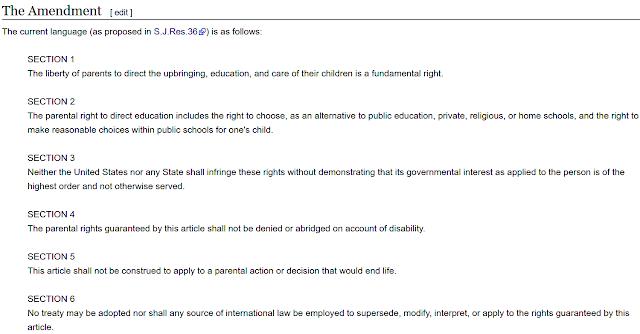