Have we forgotten all those past predictions warning what would happen if school funding got slashed, if teachers were vilified, and Act 10 past?

Today Milwaukee Journal Sentinel never mentioned any of the above, so Scott Walker, Scott Fitzgerald, and Robin Vos once again got away with attacking education like all good Republicans always do and causing the decline we're seeing today. We said it would take a while for this to happen, and now it is happening, despite having a great public school system and teacher workforce in Wisconsin:

According to a new analysis released Friday by the nonpartisan Wisconsin Policy Forum ... the percentage of students who met that benchmark has declined in every subject but one since the state began requiring the 2014-'15 school year. 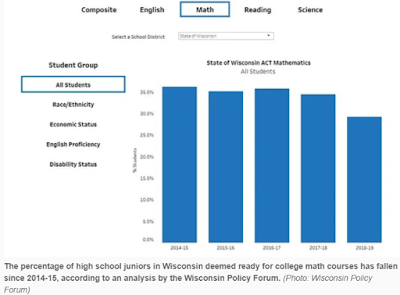 The drop for all students in every subject is smaller, so there is time to rebuild what Gov. Scott Walker blew up, but consider these few points written up by former Sen. Kathleen Vinehout back in May, 2018:


1. A 2017 analysis by the Center for American Progress Action Fund shows that a large number of teachers have left the teaching profession (and didn't teach the following year) in Wisconsin after the enactment of Act 10 ... in the 2010-11 school year teachers aged 55 and over (who were) retiring jumped from about 15 percent in the 2009-10 school year to over 30 percent.

3. And according to a Journal Sentinel special report, 2015 saw the smallest group of juniors and seniors enrolled in teaching programs in over two decades.

4. And according to a Journal Sentinel special report, 2015 saw the smallest group of juniors and seniors enrolled in teaching programs in over two decades. (Note: enrollment was down nationwide, but not like in Wisconsin.)

6. According to a 2017 report by the Wisconsin Budget Project, Wisconsin school districts struggle to fill vacancies, especially in math, science and technology. The report notes that one reason for teacher shortages is high turnover.

7. The Journal Sentinel examined spending and teacher data for 424 districts and found that 75 percent of districts were losing their teachers more often after Act 10 because a competitor offered better working conditions and compensation.

8. That turnover has been accompanied by lower, not higher, teacher salaries. According to the Center for American Progress, after Act 10, “year-over-year pay cuts were found across urban and rural counties” ranging from 2 to 3.4 percent when adjusted for inflation ... teachers with experience between five and 15 years have seen their annual salaries fall by an average of $4,273.

While right-wing groups like the McIver Institute love to claim huge taxpayer savings, much of that could have been done in cooperation with public education. Wait, I think they used to call it, negotiation. It's been a while since we've used that word around here.

They think saving taxpayers money is better than educating the next generation (they also think too many kids got to college now). McIver never brings up the majority of school districts where it's voters passed massive funding referendums, the same as if taxes were never cut in the first place. If saving taxpayer money on schools was so important...?

But they do hate public opposition and that messy thing in the Constitution...free speech, like during the Act 10 protests. NOTE: A number of myths below: no one needed protesters bused into the state, protesters never "created their own self contained society and government," teachers did protest for their kids AND themselves, and public support for occupiers never eroded. Wishful thinking by McIver Institute "fellows," but then, conservatives just don't go out and protest. Who needs to when they have big money on their side buying influence. For a good laugh...:


Wisconsin liberals were furious with Walker’s attempt to curtail union power, and they showed up in droves – and in buses from out of state – to register their disapproval. Protesters flooded the Capitol.

More than a week into the riots over Act 10, protesters still hadn’t left. In fact, they had set up camp inside the state Capitol and formed their own self-contained society and government. Public education was crippled and schools shut down as teachers skipped class and threatened to go on strike at the protests’ peak. Teachers admitted on camera that they were doing it for themselves at the expense of their students. As more people began to see what was really going on at the Capitol, public support for the occupiers eroded.