Come November, I want every farmer and rural community in the state to watch their Republican representatives sit on their hands when Gov. Tony Evers presented his plan to save America's Dairyland and fading rural communities.

For the last 9 years with Scott Walker and Republicans in full control of the state, they did nothing to help farmers and rural voters while farms were disappearing at an alarming rate...NOTHING. Yet Republican Rep. Robin Vos, in a breathtaking moment of gaslighting, said this:


Vos: “Certainly if he (Evers) has finally turned his attention to rural Wisconsin, that basically shows he has ignored that part of the state for most of last year since he’s been elected governor. So if he’s a newfound convert that rural Wisconsin has problems, of course we’re going to listen.”

But Evers reminded voters that his budget, the one Republicans abandoned in order to take credit for many of Evers promises, contained farm help as well:


Evers: "Some of these proposals aren't new, many of them are a form of what I proposed in my budget that were unfortunately taken out."

Proving Republicans have no intention of working with Evers ever, they refused to even stand up and support help for rural America:

After 9 years of taking their rural voters for granted, they never once even noticed or promised to stop the loss of farms in Wisconsin. The following didn't matter:

2. In 2019, Wisconsin lost 819 dairy farms, leaving 7,292 dairy farms in place. It marked the biggest drop in a single year, and underscored the negative impact of Trump's trade war in a state critical to his re-election bid. The state leads the nation in the number of farm bankruptcies, according to the American Farm Bureau.

3. During just the last decade, about 40% of Wisconsin dairy farms have shut down.

4. Wisconsin's remaining dairy farms, along with milk and cheese plants, contribute about $45 billion to the state.

Vos is hoping no one is going to remember that he and Sen. Scott Fitzgerald, along with Gov. Scott Walker, were in charge for the last 9 years. Instead, Vos is blaming the new governor for doing nothing...seriously. Oh, and after Gov. Evers calls the special session, Republican will only gavel it in and then leave, doing nothing again...putting it off for another day. From WISN:


Vos: "It's nice that they're trying to play catchup after literally almost a decade of ignoring rural Wisconsin..."


You can bet Republicans will trash any effort Evers puts in front of them, so they can take credit for their own stripped down copy cat version of legislation they never would have come up with themselves. See what I mean...

Republican Assembly Speaker Robin Vos said Monday afternoon that he will convene a special session Tuesday to introduce bills regarding the state's dairy crisis. The special session bills will be introduced and referred to committee.

"Farmers are already telling us the governor’s package does more to grow the size of government than actually help our rural areas," Vos said in a written statement. "We’re open to amending the bills or introducing our own proposals in order to do what’s best for rural Wisconsin."

Scott Walker Legacy; he Ignored and Destroyed Dairy Farms: Walker's 8 year focus was to replace our current structure of government with a theoretical conservative system that shockingly ignored solving problems...like the one things that put Wisconsin on the map; America's Dairyland. Instead of understanding the problem and leading a reform movement to save our states dairy farms, heck the whole industry, he instinctively thought of mega corporate farmers and worse, producing an oversupply milk. That resulted in low prices for the last 4 years:


In 2012, Wisconsin Gov. Scott Walker announced an incentive program to produce, as a state, 30 billion pounds of milk a year by 2020 — a 15 percent increase.

Despite record production every year since 2002, Walker urged farmers to step it up even more. But...the market had turned and many dairy farmers were having trouble breaking even on their new investments. Some felt duped by the agribusiness system.

Who did Walker help most? Guess...

"All of the most powerful players in the industry, except the farmer, benefit from overproduction."

Notice how Walker's program alone brought down the dairy industry in the chart below: 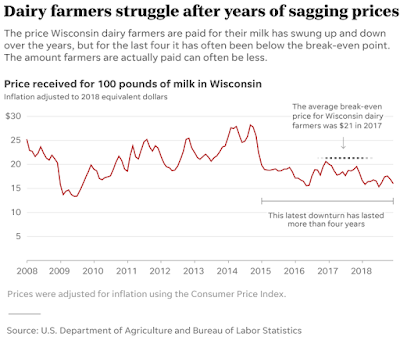