The state went from the nonpartisan Government Accountability Board to an elections commission guided, and poisoned, by right wing politics. Upfront featured...

Point 2: Democrats are always required to have legal experts, scientists and other nonpartisan researchers who can't mindlessly make things up to prove their case. Case in point; Democratic commissioner Ann Jacobs is an attorney, who has to back up every one of her statements with the law.

In the first clip, Ann Jacobs blows up the whole notion that the upcoming elections is in some way threatened by unpurged voter rolls. (Note, the video of this important debate was already disappearing from Upfront's web page, so I hope preserving it here will inform conservative voters how loose and manipulative many of their Republicans representatives are). :


Attorney Ann Jacobs: "What he is saying is somebody is going to go commit a felony in their own name by voting at an address. That does not get extra votes. That doesn't change the outcome of the presidential election. We are talking about registered voters who legitimately registered to vote, who will stay on the roles, and if they have moved, they will be able to change it. If they have not, they will be able to walk in and vote."
(From the transcript)


MR. SPINDELL: I would like to answer a question ... There is also no evidence that there is no fraud going on. I think having 200,000 extra people on the rolls, which is a Democratic ploy almost everywhere-the Dems like lots of people on the rolls, the Republicans like to have th these cleaned up.

Here's part 2, that was already removed from Upfront, so I had to record the DVRed segment with my phone. Jacobs reveals how Judge Paul Malloy went well beyond his decision to purge voter rolls, by targeting specific election commissioners for voting the wrong way...at least according to him, setting up a dangerous and unconstitutional precedent:


Judge Malloy’s order, which includes a $250-per-day fine for the three commissioners who voted against the purge... 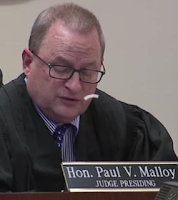 "There is evidence there is fraud. A detective of the Milwaukee Police Department Mike Sandvick did a written study on that years ago."

A few very odd things about that...


(In 2008) Det. Mike Sandvick was primarily responsible for a police report that recommended voters show photo identification to prevent vote fraud. The 67-page report was released in February 2008, when Flynn was still new on the job. It was labeled as an official police report but was unsigned. Flynn said nobody on his command staff authorized its release or endorsed its policy recommendations. Republicans quickly seized on the report to press their case for requiring photo identification.

But according to the an extensive Brennan Center study:

After the 2004 election, initial media accounts featured front-page allegations of widespread fraud in Wisconsin.[40] On February 26, 2008, the Milwaukee Police Department released a report on that election, with what appears to be a painstaking investigation of the facts, and policy recommendations offered with less care and disavowed by the Milwaukee Police Chief.[41] The department's careful factual investigation primarily revealed administrative mistakes and, occasionally, negligence.[42] It showed that much of what had originally been identified as potential fraud was in fact due to clerical error.[43] It also uncovered several votes by potentially ineligible individuals, including some who were allegedly nonresidents, and some who had allegedly been rendered ineligible due to convictions.[44] The report revealed only one potential vote that might have involved in-person impersonation fraud, with no documentation verifying that the vote in question was actually cast.[45]