Vos-Republicans can't Govern 101: Labor Shortages: It's a continuing theme here at Democurmudgeon the mainstream media is only now catching onto. It's something Scott Walker perfected when he was governor; pass Republicans ideological theories, ignore real statewide social problems, and punish anyone and anything not on the same page through coercive threats of defunding.

Even worse, Republicans are playing this game at a time when the population growth has hit a record low, meaning labor shortages will continue and get worse long term. More on that at the bottom.

Power Mad Republican Tantrum Continues: Still angry over the Covid Relief funding Governor Evers refused to hand over to the legislature, Vos-Republicans keep finding ways to force Evers to spend that relief money the way they think it should be spent. No matter who gets hurt. They brutally used school funding as a wedge. This time it's at the expense of prison staffing:

Almost a fifth of the jobs and a quarter of officer and sergeant positions within the state Department of Corrections are unfilled, according to agency data. About 1,100 correctional officer and sergeant jobs remain open, and maximum-security facilities in Portage and Waupun are operating with only half their staff.

Long-Term Pay Raise with One-time Relief Funding Scheme: It's crazy to use one-time money to pay for wage increases, but gerrymandered safe politicians can do anything they want.

WisPolitics.com, Republicans voted on a motion that included an additional pay increase for prison guards and sergeants at maximum-security prisons in addition to what was approved during the state budget process. (An) extra $2 an hour for those at maximum-security prisons, pay increases for some nurses that had been expected to cost $424,300, but provided no funds for the Department of Corrections to cover the costs. Instead, the agency will be expected to pay for the raise through existing (Covid Relief) funds. The committee motion also included.
Assembly Speaker Robin Vos argued Evers is free to pay for the other raises he requested for prison guards by using federal COVID-19 funds at his disposal.
Rep. Gordon Hintz (D) argued it made no sense to use one-time money for an ongoing cost. In this segment, Hintz and Rep. Mark Born (R-Beaver Dam) debate the motion during the executive session.

Vos-Republican Whine about Labor Shortages, do Nothing to Attract People to Wisconson: Republicans honestly think a failed ad campaign under Scott Walker is the solution to the labor shortage that stretches across the US? Forget about raising the minimum wage, paid sick leave, or investing in tech and clean energy businesses. AP 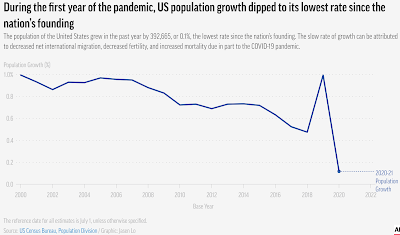 1. According to census data released in September, the population of the United States grew more slowly in 2021 than in any other year on record.
2. That will increase the need for immigration by younger workers whose taxes can support programs such as Social Security.
3. “COVID really was a stress test of our whole system and how it fails to support women and families,. Women were much harder hit in the pandemic. They lost their jobs at greater rates and had to give up their jobs, often to do home-schooling. The pressures on women were enormous and there’s really no safety net in the U.S.” - Prof. Linda Kahn
4. International migration dropped by about half from the previous year because of COVID-19 restrictions, such as borders being closed for nonessential travel and the closure of many consulates abroad where visas are issued. As recently as 2016, the U.S. had a net increase of more than 1 million international migrants.
5. In more than two dozen states, most notably Florida, deaths outnumbered births. Deaths exceeded births in Florida by more than 45,000 people

2021 could permanently shift power from bosses to workers.

So what would Vos-Republicans do to solve the labor shortage? Would you believe...child labor? Yup. Even the conservative Restaurant Association disagreed:

A bill authored by state Sen. Mary Felzkowski, R-Irma, aims to fill Wisconsin’s labor shortage in part by letting 14- and 15-year-olds work until 9:30 p.m. on school nights, instead of the current 7 p.m. limit.